It is the dawn of a new age. The heroes of Golden Sun have been
abandoned, and the land is falling into darkness. Now the world's final
hope may also be its doom. Manipulate the environment with psychic
energy and fell whatever beast stands in your way to safeguard humanity
before the heroes of the original Golden Sun can stop you.

Saturos and Menardi have activated two elemental lighthouses, and only
two remain before the power of Alchemy will be unleashed on the land of
Weyard. Will that power usher in a new golden age of civilization or
bring about the ruin of mankind? Guide Felix, Jenna, Sheba, and Piers
across an enormous world and through labyrinthine dungeons as they use
their abilities to unravel the mysteries of Weyard's past.
This classic game is part of the Virtual Console service, which brings you great games created for consoles such as NES™, Super NES™ and Game Boy™ Advance. We hope you'll enjoy the new features (including off-TV play) that have been added to this title. See more Virtual Console games for Wii U.

(+) Certain Psynergy Mechanics are well designed and the game shows you where and when to use them to solve puzzles. Examples of this can be seen at the end of the Rock Dungeons (Airs, Aqua, Gaia, Magma) when receiving the particular Psynergy at the end of each Dungeon. (Image below is of Magma Rock)

(+) Battle system continues to excel with variability in classes, strategies, and party setups.

(+) Get a good sense of the characters out of dialogue. It's well written and even includes some genuinely funny moments.

(+) Music is fantastic as always. The battle themes are so good that even after 60 hours of playtime, they never got old. My only gripe is that the ship battle music wasn't as present in the game.

(-) Shortcut inconsistencies are often frustrating. In some dungeons, the game offers the player shortcuts where a pillar or block is pushed, creating a shortcut for the player to have an easier time backtracking. However, these shortcuts only act as a shortcut for one way as the pillar or block is reset after moving into a different room. Not only does this add extra padding to the game but these shortcuts end up only being useful in situations where the player exits the dungeon. These types of shortcuts are redundant for the entirety of the game because the player is given the Retreat Psynergy from the very start.

(-) Not only do shortcuts revert after leaving a location, but so does the majority of objects that are manipulated using Psynergy. In certain cases, this is required for some puzzles. But in many of them, the player is forced to manipulate the same objects again and again. An example of Psynergy manipulation progress can be seen in Gaia Rock where the player has to utilize the Growth Psynergy to be able to reveal the right paths. (Seen in the image below) 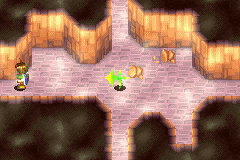 When leaving Gaia Rock either naturally or by using the Retreat Psynergy and re-entering, these signs continue to be manipulated and show the player the right path. This is a rare case in which the game decides to save the player time by keeping the players progress when in regards to Psynergy manipulation.

(-) Golden Sun: The Lost Age's story takes a while to pick up. The games pacing is fairly slow at the beginning. The first 10-15 hours are not very eventful and it's easy to feel disengaged at the beginning of the game.

(-) Because the pacing of the game's story is slow at the start, it can be easy for the player to get lost when attempting to explore where to go next. Hopping from one town to the next is a good method of progression, but I can't help but think that the player could have gotten a bit more direction.

(-) An important method of world map traversal is expected of the player while not teaching nor showing the player the method. On the path to the Jupiter Lighthouse, Felix's party is blocked from the middle of the Continent of Atteka by rocks protruding from the sea. To get around these rocks, and continue onward to the Jupiter Lighthouse, the player somehow needs to either know or explore the boundaries of the entire continent and find a small delta. This small delta is the only one in the entire game that the party can interact with on the world map. There are other deltas on the world map, however they cannot be sailed on. There are no hints nor any indication that this is even possible as a way to traverse the world map.
Read more...
DevoutJun 17, 2020
0
read more
Related pages
FINAL FANTASY TACTICS: THE WAR OF THE LIONS, G Prime Into The Rain, Type Knight, pes 2008, The Church In The Darkness (itch)