Exceptional
I loved this one. Just on the right side of difficult, finishing the whole thing took me over 50 hours. And none of them left me feeling bored or frustrated!
CirwenJan 27, 2021
0
Recommended
Translated by
Microsoft from Deutsch
A thoughtful Card Game that combines Elements of Solitaire with Elements of Collectible Card Games. By selecting and Using the Spells, the Luck factor can usually be compensated. The Game manages to Attribute losses without a guilty Conscience to Bad luck, while Wins are based almost entirely on your own Skill and good Tactics. The 6 Decks play amazingly differently and are not just content extension. There are 19 different Bosses who have some random Properties. Against each Boss, you need your own Tactics, which you develop over time and that become more and more demanding the further you progress. This Tactic often also depends on the Deck you compete with. If you Lose, you have to start all over again, there are no Memory points. This bothered me at the Beginning, but later I noticed that only such an Arc of Tension can be maintained, because a Loss Really has consequences. And that really Consequences, because the Newcomer of a Memory stick is not a Consequence. For this Very reason, I also think it's good that you can't Take back Trains, even if that might have made sense in a Beginner'S mode. There Are still a few Suggestions For improvement. I would like, for Example, to be able to disable bonuses once purchased As an option again in order to increase the Challenge. I also miss tool tips for the Spells (especially at the Beginning it's silly if you don't know exactly what the Saying Is doing), the items purchased Are not displayed during the Fight. In addition, I would have liked the Display bar on the right edge Of the Screen, or at least made it configurable. It took me a relatively long time to defeat all The Bosses with all The Decks and managed that in 36 Hours of Play. While It was a lot of Fun, now I notice the Replay value is very low. I would have liked more Bosses, more Decks, more Content in short, maybe also a Challenge Mode that invites you to play again and again. So there remains a Game that I really liked to pick, but which I put aside after a relatively short Time.
Read more...
justblue
Steam, Apr 22, 2019
Recommended
Translated by
Microsoft from Italian
Finished at 100% for several weeks and still manages to entertain me, it is absolutely worth its price
emax95
App Store, Apr 11, 2019
Recommended
Translated by
Microsoft from Spain
Fun, another way to play Solitaire, with funny drawings and good animations. Too bad it's not in Spanish. 😔
sargentokeroro
App Store, Apr 11, 2019
Exceptional
Translated by
Microsoft from Dutch
Super addicting and fun card game with RPG elements. Challenging but always fair. Requires different strategies per deck and per opponent, very clever. My favourite iPhone game!
Rezistenz
App Store, Apr 11, 2019
Exceptional
Translated by
Microsoft from Deutsch
I also find it difficult to understand the bad Reviews. I find this to be a game where the Beer-re-of-zero principle is very useful and also well implemented.
Lauflicht
App Store, Apr 11, 2019
Exceptional
Translated by
Microsoft from Dutch
Amazing game! Really inventive take on solitaire. Keeps you sharp because no game is the same. And no in-app-purchases! I hope they put more monsters and variations in future updates. Well worth your money, buy it now, you won't regret it!
Pakjemelk
App Store, Apr 11, 2019
Recommended
Translated by
Microsoft from Spain
Of course, if you like to play Solitaire and want to add an extra interest with good graphics you should try this game. It Always goes on my iphone and accompanies me not only in dead times, also in long sessions when you get hooked because you win one game after another or you want to improve your position.
rafarq
App Store, Apr 11, 2019
Exceptional
Translated by
Microsoft from Deutsch
One of the best Card Games in the Store, and of course, happiness is in the Game, is also a Card Game. But Luck can be countered by strategic Exarting. Class Game, and so captivating that I bought the next Card Decks via In-App-highly recommended!
tina rumpel
App Store, Apr 11, 2019
Recommended
Translated by
Microsoft from Italian
Edited the graphics and good idea of the "lone battle", but unfortunately some gameplay choices undermine the fun heavily. Also the price over €4 + any other purchases in the app leads to advise against the purchase. If you really like the graphic style and you want to try the game should make the purchase when, as a few days ago, the price of the app will drop again to €1 and broken.
Diome
App Store, Apr 11, 2019
Exceptional
Translated by
Microsoft from Deutsch
I don't understand the bad Reviews. Clearly you lose faster with a bad Deck. I don't want to close the Game right away and Luck is Part of such a Card Game. The Decks also play differently and the Spells and Items bring extra Variety. I bought the Extension with Epic mode and now I managed all of them. One of the best Games of its Genus with Long-term Motivation for little Money. Clear Recommendation.
Hans_im_Glück
App Store, Apr 11, 2019
Recommended
This is one of the best solitaire RPG’s and card games on the App Store. Not the best (i rate Card Crawl higher) but very close.

Solitairica is a roguelike. There are 18 battles on a way to a final destination and each run you become stronger and have resources to buy additional powerups. 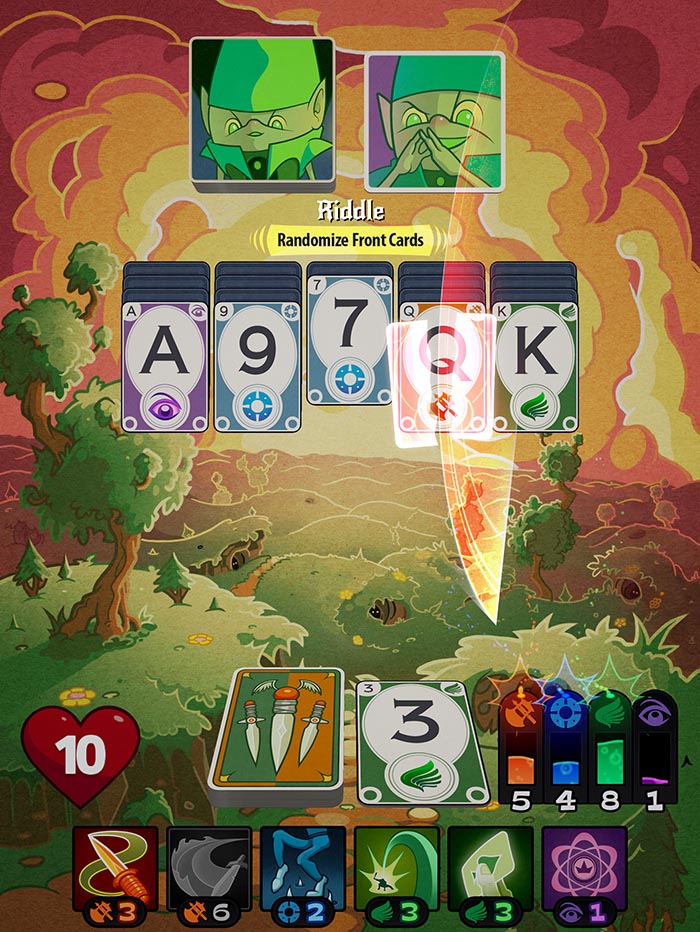 The game mechanics are built around four powers: attack, defence, heal and perception. Each card belongs to certain power and when you remove the card you gain +1 in that power. In return you gain the abilities to remove a card from deck, draw a shield and a variety of others. Monsters have their own special abilities and can, for example, poise cards (those do damage every turn until removed), mix the deck, take away earned powers.


The main flaw are early fights, which are too simple even for tutorial purposes and so each run starts slow and becomes interesting only after 5-6 (out of 18) fights.

But otherwise great game and a lot of fun. And it runs in portrait mode which is always a plus.
«Can’t stop playing»
«Constantly dying and enjoy it»
accujazzJul 13, 2017
1 user found this helpful
+1