You might know that The Witcher 3 is a popular game (over 33M copies sold) and has been widely considered to be the GOTY every year since it first came out. You might have also heard that The Witcher 4 was not happening and CD Projekt Red, the developer of the trilogy, stated that the third game was the final chapter of Geralt's story with no sequel of any sort planned.

CD Projekt CEO Adam Kiciński told in an interview that another game could be in the works. And this is not the tabletop RPG that is going to come out soon → https://rawg.io/posts/213

“The first three Witchers were by definition a trilogy, so we simply could not name the next game The Witcher 4. This does not mean, of course, that we will leave the world of The Witcher, created by us for over a dozen years. The Witcher is one of two franchises on which to build in the future activities of the company. Today, unfortunately, I can not reveal anything more.”

Of course, now the company is focused on Cyberpunk 2077, the second franchise of the two abovementioned. So we'll have to wait, as always.
Serge UlankinJul 11, 2018

A tabletop adaptation of Witcher is almost here!

Great news for all of us Witcher fans!

After a long development cycle, writing, editing, playtesting the Witcher TRPG has been sent to the printers according to R. Talsorian Games, the creators of the game.

By the way, R. Talsorian Games are the same guys who published Cyberpunk 2020 many years ago on which the latest CDProjekt RED game is based.

Here is a screenshot from the rulebook. 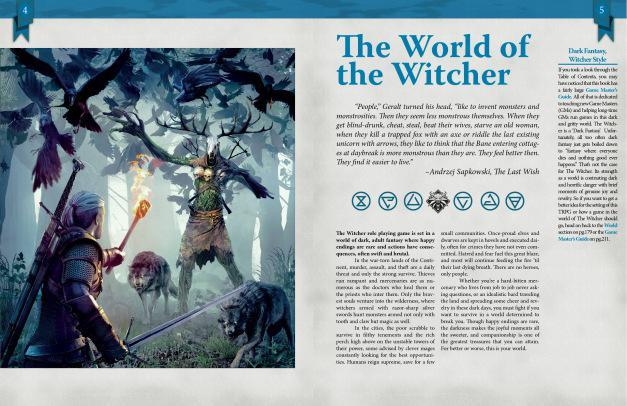 Geralt vs The Griffin

IMHO, one of the funniest things about The Witcher 3 is the bugging Roach. It constantly sticks in benches, trees and literally everything around. I've been looking for a video of it but found something better instead.
Runaway13077Fri Jun 22 2018 11:52:22 GMT+0000 (Coordinated Universal Time)
Show 2 replies

Ciri talking about the world of Cyberpunk 2077

With all the craze about a new CDPR title going on, I remembered this moment in The Witcher 3 again. Ciri described a world of Cyberpunk 2077 in few words (see the video at 2:39). Clearly it was supposed to be an easter egg, but after seeing the new trailer I started to hope that we would actually see Ciri in Cyberpunk 2077 and perhaps even would get a chance to interact with her somehow (probably during a really small side-quest). I just can see how she fits in that universe too. Probably that is never goingto happen due to the legal rights to characters, etc., and we will get just another eater egg, but I hope anyway.
Serge UlankinJun 18, 2018

Geralt showing off his fighting moves in Soulcalibur 6

IGN dropped a long video with lots of details how Soulcalibur VI got Geralt as a guest character in the game. There are lots of footage showing off Geralt fighting moves (there is even a Geralt fighting Geralt scene for double experience). Also Motohiro Okubo explained how they made Geralt's moves to look authentic (they brought the same actor who did motion capture for Witcher 3 in Japan and mo-capped him for Soulcalibur). Okubo also explained how supportive CDPR were helpingto bring Geralt into the game and also probiding tons of assets for Bandai Namco to make a Witcher-themed stage.
Serge UlankinWed Jun 13 2018 15:30:26 GMT+0000 (Coordinated Universal Time)
Show 1 reply