This review is for the Switch port - which I put 35 hours into before putting it aside because of a mix of difficulty and performance issues (I got to High Dragun only twice just to take a death to the game hitching at the crucial moments of its final phase attacks). Those hours alternate between fun and frustration but I would still recommend the game on a platform without the Switch version's problems, albeit only to someone who enjoyed challenging games with no difficulty options.

Despite everything Gungeon has beautiful presentation. The title screen and theme is drop-dead gorgeous, and that carries over to the game with bouncy pixel art (which is given lots of time to shine with the huge variety of weird weapons), little touches like your home base changing depending on how many deaths you've had, very amusing puns, and lots of physics particles bouncing everywhere. Unfortunately that seems to come with occasional issues technical issues like hitching when entering crowded rooms and big slowdown with lots of bullets on screen (like against the second and "final" bosses) and the "Speed mode" option makes those worse if anything. Mechanically it's similar enough to give me that Binding of Isaac fix but really it's a whole different beast. Runs are much longer and the game is HARD (reaching that aforementioned second boss took 14 deaths), although it does feel fairer than BoI - runs are much less tied to random item drop rates and more skill based, rewarding you for dodging the bullet hell nightmares. Yes, shockingly it is actually more bullet hell than BoI, and unfortunately there is the odd unfair enemy placement where immediately upon walking into a room you'll get smashed by 2 shotgun shells blocking you in right next to the door with not a lot you can do about it.

The reason runs seem less influenced by item luck is that, so far at least, I've only found items that are more sidegrades or slight buffs - none of the mechanically game-changing insanity of Isaac. So far the pickup that messed with the game's fundamentals the most was probably a Gears of War style active reload which, while fun, doesn't really give a huge benefit or change of pace. Unfortunately there are also a few too many hidden stats at play to make sure you don't get too lucky, for example the chances of getting more than 2 good items in one run drops down to 5%, which means the really fun OP good luck runs you could very rarely get in BoI just aren't possible. Another strange choice (although it might just have been my luck) is that it takes a long time to unlock your first NPC/permanent upgrade shop, something which I can see putting of people who want at least a little sense of progression, but that does have the benefit of meaning when I finally did get a shop I had more than enough money to get whatever I wanted. The shops don't get new items until you buy everything on sale, and there isn't a way to remove them from the item pool à la Crypt of the Necrodancer, so you're sometimes forced to spend money on things you don't want and that you know will actively make the game harder by stopping you getting the items you do want. NPC quests are much more interesting and involved than any other Rogue-like I've played, like Ser Manuel's story and filling up the breach with rescued people. 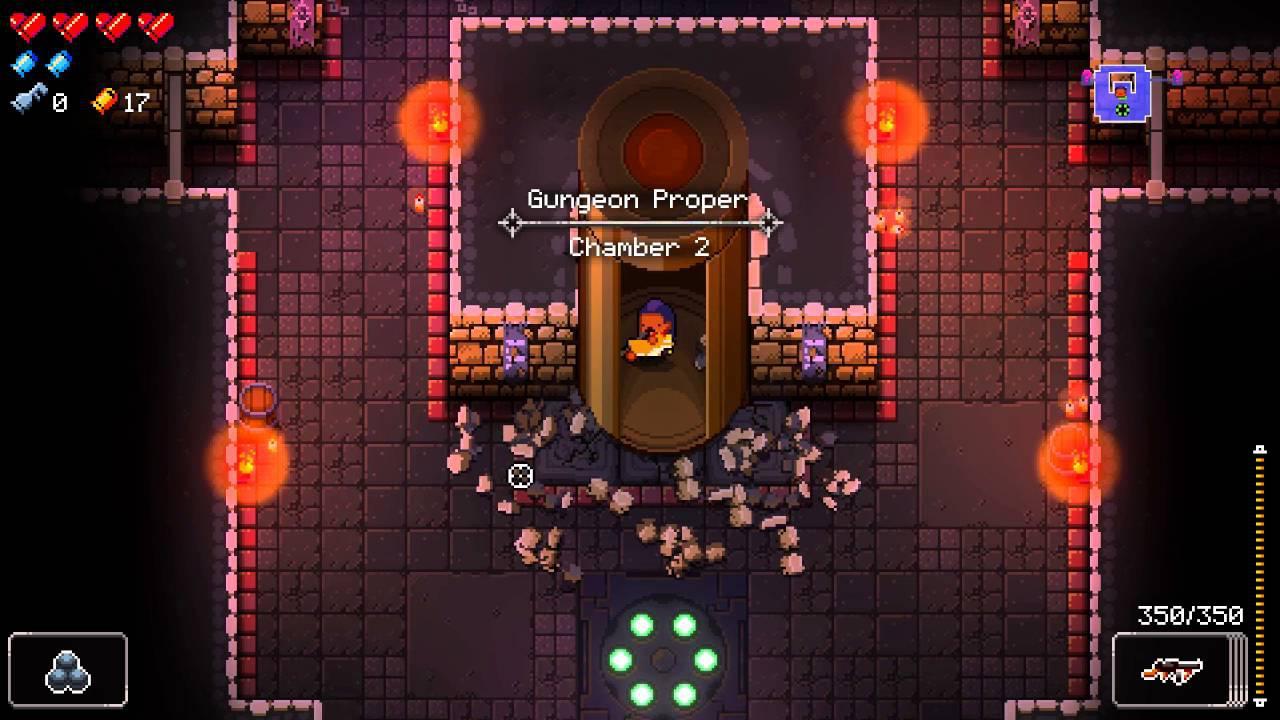 The teleport system is a big Quality of Life feature: almost every room of interest or branching paths has a teleporter in it that you can near instantly go back to with a tap of the map, completely cutting out boring backtracking, although to balance that any items left in a room (except health) are gone for good. It's much appreciated that they want to minimise the player's wasted time in a game that you'll likely be making hundreds of runs in. On the other hand Weapon Enhancements (combos) aren't as obvious as I'd like - neither telling you which items combine, or the new effects they gain - and because you get so little info about guns/items in general they can be a bit nonsensical, with the only way to know them being to memorise the whole list.

On the Switch version the achievement system is missing, which is a much bigger problem than in most games as it's not just trophy-hunters that are affected. the achievements each unlock a good weapon/item for use in the dungeon and provide a short-term goal to work towards at the start of the game: keeping minute-to-minute gameplay rewarding, incentivising trying out different playstyles and making the overarching long-term goal of exploring the Gungeon seem less daunting. While the weapons still unlock when you reach the achievement milestones they aren't visible in-game (and there isn't even an internet browser on the Switch to keep a list open on, thanks Nintendo) leaving the only sense of progression to unlocking shortcuts, which are intended for experienced players and necessitate lots of luck and near-perfect no-hit runs. The lack of achievements basically cuts out the whole early-game of Enter the Gungeon, and all they need is a Shovel Knight style "Feats" list to fix it. If it sounds like I'm blowing a small issue out of proportion with that imagine playing a Breath of the Wild without any shrines, as they serve the same moment-to-moment gameplay purpose.
JustCozzieJan 1, 2019
Nobody found this helpful
-1

Recommended
If you like bullet hells and you haven't played this, you really aught to.
Graham KaletskyNov 21, 2021
0
Exceptional
What I like to call an "essentially perfect game". If you're looking for a top down dungeon crawler roguelike that's full of guns, this is it.
- Everything is crafted with perfect care. From the simple characters, to the enormous assortment of guns, down to the game's very structure and the many, many updates.... everything in this game is simply well thought out and executed.
- There's always something new to discover on each run—a new floor, a new enemy, a new weapon, a new synergy—so every playthrough is different.
- Game unfortunately doesn't explain that it is essentially impossible to "beat" until you've died quite a number of times. It's much more tolerable once you understand that fact (you have to unlock a certain number of guns, and memorize certain enemy types and patterns, before you have a chance to really win)
«Just one more turn»
«Can’t stop playing»
FAT_DOINKMay 3, 2020
0
Exceptional
Light to a decent 9.
DabzillaApr 18, 2020
0
Recommended
7/10
«Constantly dying and enjoy it»
possumApr 12, 2020
0
Recommended
quirky bullet-hell-like rogue-like with randomized levels providing infinite replayability...fits this title well, it's just not my favourite genre
McStruthersMar 14, 2020
0
Recommended
Translated by
Microsoft from French
Enter the Gungeon can undoubtedly be seen as a vague cousin of the binding of Isaac and nuclear throne. Nevertheless, any bastard he is, he manages to extricate himself from his two elders to develop his own characteristics. No plagiarism, no repumping, no excessive inspiration so, but simply a formula that works very well and that succeeds to be unique. The pitch is as simple as other games of the genre. You play as Explorers (gungeoners) who have learned of a very special weapon in a certain Dungeon, on a certain planet: the Gungeon. This special weapon does not usurp its reputation since it is neither more nor less of the pistol to kill the past (to understand in the sense of killing its own past, not the historical past of mankind or others)! The Gungeon bears its name for a very simple reason: everything inside or almost is related to the "cult of the Gundead", in short to guns, bullets, explosions... 4 classes, quite different from each other (the prisoner, the Huntress, the Navy and the pilot), but not fundamentally distinct-much like most of the characters in the binding of Isaac, it is mostly a few objects of departures that change but the gameplay is substantially the same. 5 levels to explore before arriving at the guardian monster of the Lair and the room containing the famous pistol. The bestiary is varied and many monsters will give you a twist, as well as bumps. Again, as in TBoI, full of little tricks, methods to optimize its runs, etc. exist. Many weapons and objects are to be unlocked, some are good, others not terrible, and still others are very powerful. And I'm not talking about all the secrets since from the top of my nearly fifty hours, I've only seen a few; but I have heard-from safe sources-many other things (Rainbow chests, levels "glitch"...). Moreover, the graphics are in pixels, but it is a very beautiful pixel art, with a careful work on the particles and the objects of the décor. But, as in most rogue-like, learning is a long road, not always the most enjoyable but visible and very rewarding in the long run. Three things to remember in this type of game:-the skill, fundamental and even more important in this game than in Isaac. Avoiding bullets, knowing when to use its ballablancs (gameplay element cleanses the room from all the bullets on the screen and preventing the enemies from momentarily firing), get the best out of its gear, optimize its rolls (the roll is here essential and is special-as long as we are in the jumping phase to make the roll, we are invulnerable, but this is no longer the case when we touch the ground), to a lesser extent, know how to use the tables (we can flip the tables to protect bullets, as long as it is not broken), etc.-knowledge. Often forgotten but never neglected in the rogue-like (among others). Obviously, once, twice, three times against a boss, it's not always enough to know how to react. It is only by the number of runs, the number of times we confront such enemies, that we enter in such type of room, etc. that you will gain knowledge. It even affects the general direction of the run, not just a particular room or boss. Know how to manage its casings, its ammunition, know how to detect secret rooms... are all things that are part of the overall knowledge of the game and that make you improve on the medium and long term. -luck. Less present here than in Isaac, she still does. The rotten runs where only the top of the top players can get away and others where one literally rolls on. But, as I said, it's less than Isaac: the player will find himself "fast" (in quotation marks because it will be mostly on the fourth level that it starts to catch, and it takes some time to reach him) stuck if he is not able to improve his skill and avoid bullets. The runs where you ride on all enemies without actually resorting to a certain dose of skill are rarer. In conclusion, enter the Gungeon is a game that is well worth its modest price. It makes without hesitation possible part of the Jet-set of the rogue-like, with graphics doing much more than the minimum Trade Union, a nervous and efficient gameplay, a bestiary and a varied and sympathetic equipment. It is unlikely that he would dislike a veteran of this type of games and a short player who recognizes himself in the characteristics mentioned in my evaluation.
Read more...
Kamuy
Steam, Apr 18, 2019
Recommended
A solid game you can dive into whenever you want - and pretty damn challenging.
treesniffingzombieSep 6, 2018
0