A game that's so often exceptional that it more than makes up for whatever faults it has. Whether you're running around the gorgeous open world, exploring mysterious ancient ruins, having tense conversations with megalomaniacal Silicon Valley execs, or soaring through the sky, it's all done at an incredible level of fidelity and artistry. Even the story, which already seemed played-out in the original, manages to keep something special reserved for each turn, making story missions worth looking forward to. 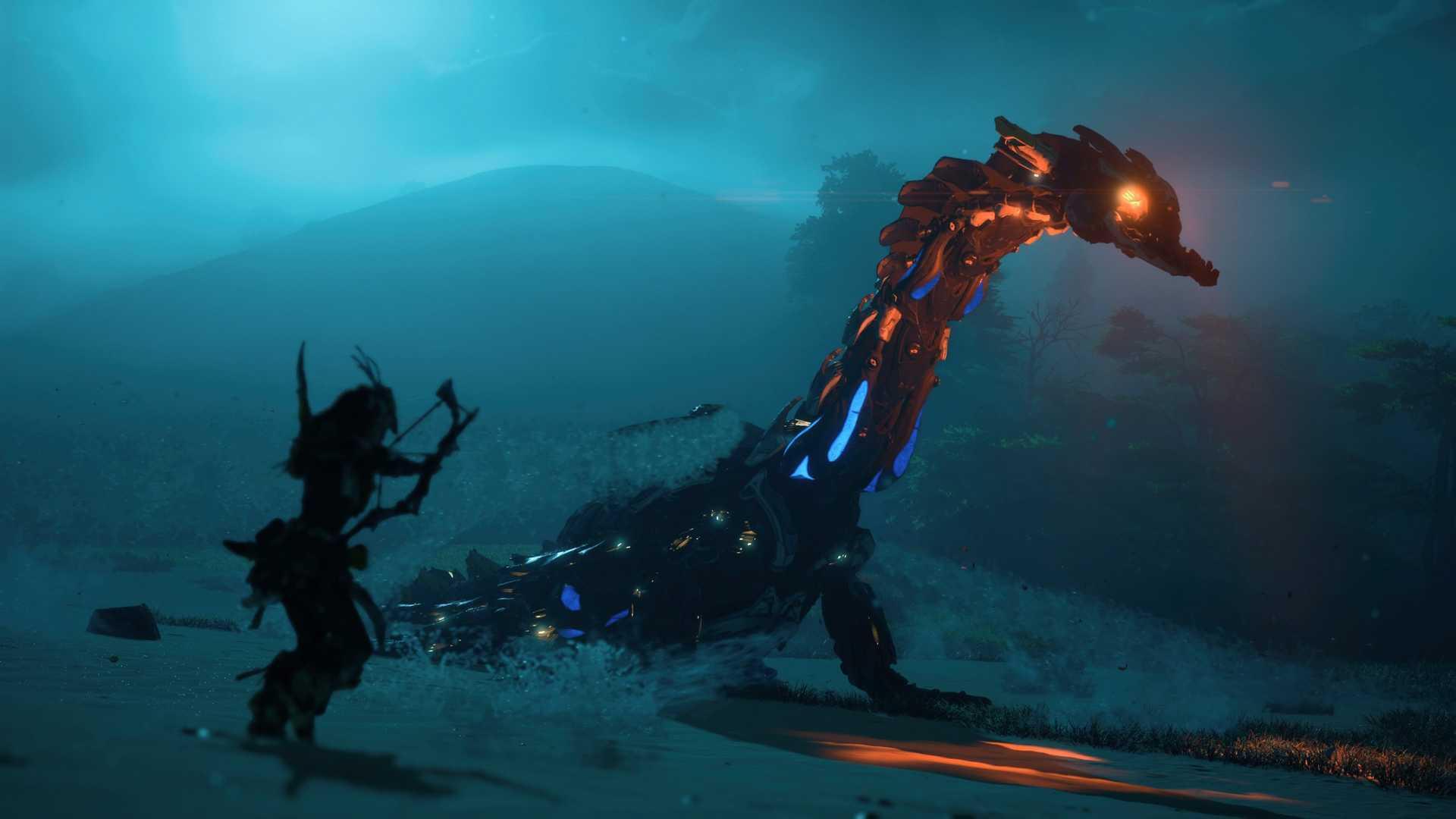 Pros:
- Exceptionally well written, modeled, and acted characters. Even chats wide side characters seem to be fully motion captured, with multiple camera angles. Dialogue is well edited and never overlong.
- Gorgeous, expansive open world. While the scale of the game is overwhelming at first, it's all perfectly manageable by the end.
- Detailed, well-thought out story and lore. Everything happens for a reason, every character has a motivation, every technology has an origin. While naturally being "fantastic" sci-fi, a great deal of thought has been put into how and why everything works, which is something I absolutely adore.
- Incredible monster design. Continuing the legacy of its predecessor, HFW simply refines the formula which created their legendary "robot dinosaur" opponents. They all look amazing and include a variety of bits to harvest and disable for tactical reasons.
- The little things. If you've cleared an area before its quest starts, Aloy and the characters she's talking to respond appropriately (enemy bases don't magically repopulate when the quest for the area starts). Characters have tiny, split second facial expressions which express how they feel about things rather convincingly. When you're flying, birds will sometimes form up and fly with you. Every little thing adds up, and it feels extraordinary.

Cons:
- Aloy will not allow you to think for yourself. If there's a ledge she can jump to, an item she can interact with, or a door she should be going through, she will tell you. This isn't such a problem in the open world, but in "dungeons" she will peppily spout off the "answer" to climbing puzzles before you can even start to think about them, which is absolutely infuriating.
- Combat, especially when engaged with 3 or more enemies, feels impossible. The camera doesn't work well in these situations, and Aloy's moveset certainly doesn't. By the very end of the game you're capable of handing these situations relatively well, but controls and camera are still a big issue.
«Blew my mind»
«Can’t stop playing»
FAT_DOINKApr 30, 2022
2 users found this helpful
+2

Recommended
I really enjoyed this game. The game mechanics are great. However, while the story is interesting, the writing is incredibly bland. I can easily recommend this beautiful and fun game to anyone, but it falls shy of exceptional based on the narrative failings.
Christopher James ManglosDec 29, 2022
0
Exceptional
Horizon Zero Dawn is one of my (if not the) favorite games.  Horizon Forbidden West takes that amazing core and expands it in every way.  I did like story and the path Guerilla took with it.  I was constantly intrigued with the next steps even more so than the previous. Weapons, melee, Skill Tree, inventory management, graphics, etc. were al improved and made extremely better.  The map is beautiful and the new mechanics (grapple and parachute) are fantastic to experience.  Even the mini-board-game "Machine Strike" was appealing, although jarring to gameplay.  Hope they put this out as a mobile game.  If you liked the previous, you'll like this more.

With that said there were some items that fell short.  The Hunting Grounds made no story sense, where the previous game tied them into a story line that made sense, these feel like "we had them before...guess we should keep em...".  The Arena more than made up for the lack of story tie in for the Hunting Grounds, so I wish they focused more on the Arena and dropped the Hunting Grounds.  Melee was head and shoulders better than Zero Dawn, but the way they tied in the new "combos" was awful.  The Melee Pits and Enduring were probably the worst part of the game in general. This goes to a large narrative of "forced gameplay"...but won't expand on that.