Ghost of a Tale review
Exceptional
by iBarin

Lord, what a great game! The true cuteness, full of surprises!
This is a mix of non-lethal Hitman and level design of Dark Souls (Metroid if you prefer). After couple of hours you may accume the game is small, but there is more locations shows up later. They will connect to rooms which you already run many times. Small size of the hero, make you carry a chair to reach out top shelves, so world looks really large.
From the very beginning the game drop a lot of lore, in a variety of ways. Very useful books: with sets of songs, outfits and the history of the hero, which opens slowly, while finding the collectables.
The story looks grim: enemies have occupied native land, prisoners are preparing for execution, but everyone jokes easily and rats sometimes even help and open like real characters. So its not that serious.
If you miss fary tales - it's your choice! 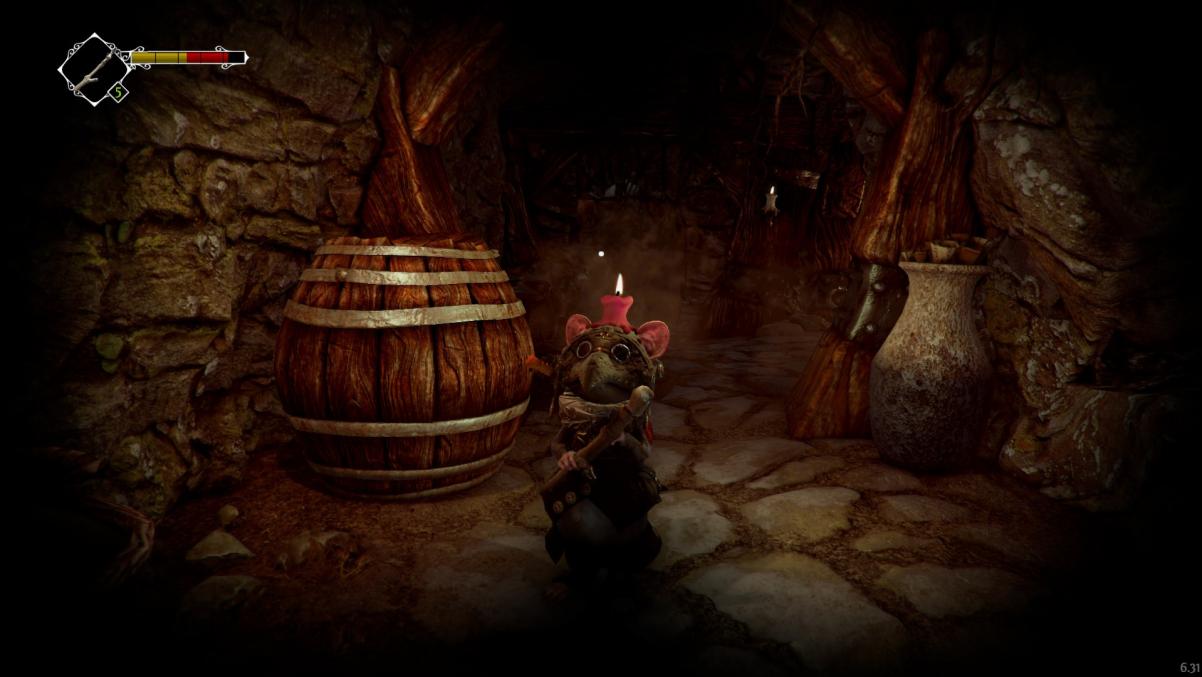 One more thing: just look how ears and paws shine through the light. It's magical!
«Blew my mind»
«Liked before it became a hit»
«Sit back and relax»
iBarinMar 16, 2018
3 users found this helpful
+3

Recommended
Translated by
Microsoft from Deutsch
Ghost of a Tale is by Far my top game of 2018 and is Likely to stay that way. This Game offers everything I would want from an AAA title at a ridiculous Price that is far too cheap for this Feat-feat all the More so since it was not created by any well-known, large development Studio with a huge budget, But from a downright tiny Team of Developers who have worked on it with Passion and made it the terrific Game it is. Ghost of a Tale throws us with our Protagonist, the Bard Mouse Tilo, into a World that is elaborately and Lovingly designed and invites you to Explore and Explore at every Turn. The Story begins quite simplistic and straightforward, but quickly evolves into a profound, complex and sometimes very emotional Story, which seems all the better and more convincing because the whole Game builds a wonderful Frame around it. Be it countless possible Conversations with a Variety of lovingly crafted Npcs, a veritable Barrage of notes and Explanations on Names, places and events where you can learn a lot about the Lore of this World-and, moreover, some entertaining Anecdotes Agets-or an open Game World that gets even bigger and more complex With each new Area and offers almost infinite opportunities for Exploration and Exploration. The Npcs are very individual, possess magnificently worked Out personalities and inevitably grow to the Player's Heart through their Way sooner or later. Here, too, you will find humorous passages and funny Events at all Corners and ends, which are guaranteed not to make a Dialogue in the Game boring. In addition, as the Game progresses, you'll be rewarded with a Plethora Of side Quests if you deal enough with the Npcs and the World, which are wonderfully integrated into the Main Story. Both main and Secondary Quests often require Heads and Ingenuity and Require different Thinking than in most other adventure games; For impatient Players, the Burgsmith-a Pound guy from a Rat-is invaluable Because (with appropriate Payment, of course) he makes one or the other helpful tip jump. Even with the actual Gameplay, Ghost of a Tale Prefers Ingenuity to blind action: As a small Mouse amid larger and dangerous Animals, you have to rely on Secrecy, Flinkness and Cunning if you want to get further than into the Clutches of the next Guard rat. Unlike in other stealth games, however, there are no long periods of Creeping here that require the Player to be inordinate, but often enough with Fast-paced Passages. With all these Points, the Game would already be great; Even as a pictures-and toneless Pen & Paper, a vibrant, imaginative World and a great Story here to get lost in. But SeithCG put one more thing on it: The Graphics of this Game are (without Understatement) breathtakingly beautiful. From the deepest, gloomiest dungeons to the crumbling Battlements of the Castle to the dense forests outside the Walls, it looks terrific All round. Ghost of a Tale possesses the most impressive and atmospheric Lighting effects I've ever seen in Video Games, and comes up with a Picture violence where you pause often enough just to enjoy the View. The musical Accompaniment is usually restrained and acutely accompany the Action without distracting too much from it. Here I feel reminded of The Legend of Zelda: Breath of the Wild, as both Games create great Atmosphere with few, good sounds. A special Highlight, however, are the Songs that our Bard plays on his faithful lute and which invariably sound great. The only Negative Point I can even mention here is that the Game is relatively short, but of course it also underlies the limited Resources of the Developers. Above all, it demands a Continuation of the great Story, which has thrilled me, often surprised and sometimes also touched me VERY much, and of which I want MORE, yesterday. This Game is a Must for any Fantasy Lover who wants to get lost In lovingly designed worlds with great Graphics and Music and experience a great Story. I Haven't been so excited about a Game since Ori and The Blind Forest and Breath of the Wild. My explicit Praise to SeithCG: Class Work, on like this and forth with Ghost of a Tale 2!!!
Read more...
Jester
Steam, Apr 19, 2019
Exceptional
The best thing about this game is its developers. They update it all the time, fix bugs and take into account the players’ requests. They’ve finally added a FOV-slider and you don’t need to look up any more!
Ghost of a Tale makes you remember why you like playing video games. Even if you’re hard to impress, you’ll like this game. It feels like your very first try - and it’s exciting and nostalgic. The project in general is well-done and has everything you need: a good story, well-balanced gameplay and its own remarkable style.
BambeiApr 4, 2018
1 user found this helpful
+1
Skip
I want to love this game but it doesn’t help me. Nothing is clear, you can’t properly locate or find anything you need. You just look up all the time - and that makes defeating enemies freaking too hard. And they are everywhere! Even the cute animation doesn’t save the game. You don’t progress, just suffer and can’t change it, unfortunately.
MeZevApr 4, 2018
Nobody found this helpful
-2