I'll try to be as concise as possible about PoP, since there's so much for me to say about this lovely game. My review is about the classic 1990 MS-DOS port, which established the game as the reference it is today (and is the only version I've played).

My first contact with Prince was circa 1993/1994, when I was about 9-10 years old. At that time, I had an Olivetti PC1 (https://www.seasip.info/VintagePC/prodestpc1.html) as the only PC, already obsolete at the time and offered by an uncle. It had a small (mono) CGA b&w screen (last row on the screenshot below) and a PC spealer, and Prince ran slow, the movements seemed in slow motion, so of course that if we timed, the 60 minutes lasted much longer. I don't know how much time I've spent till I finally defeated Jaffar and finished the game, I only remember that it seemed like ages. 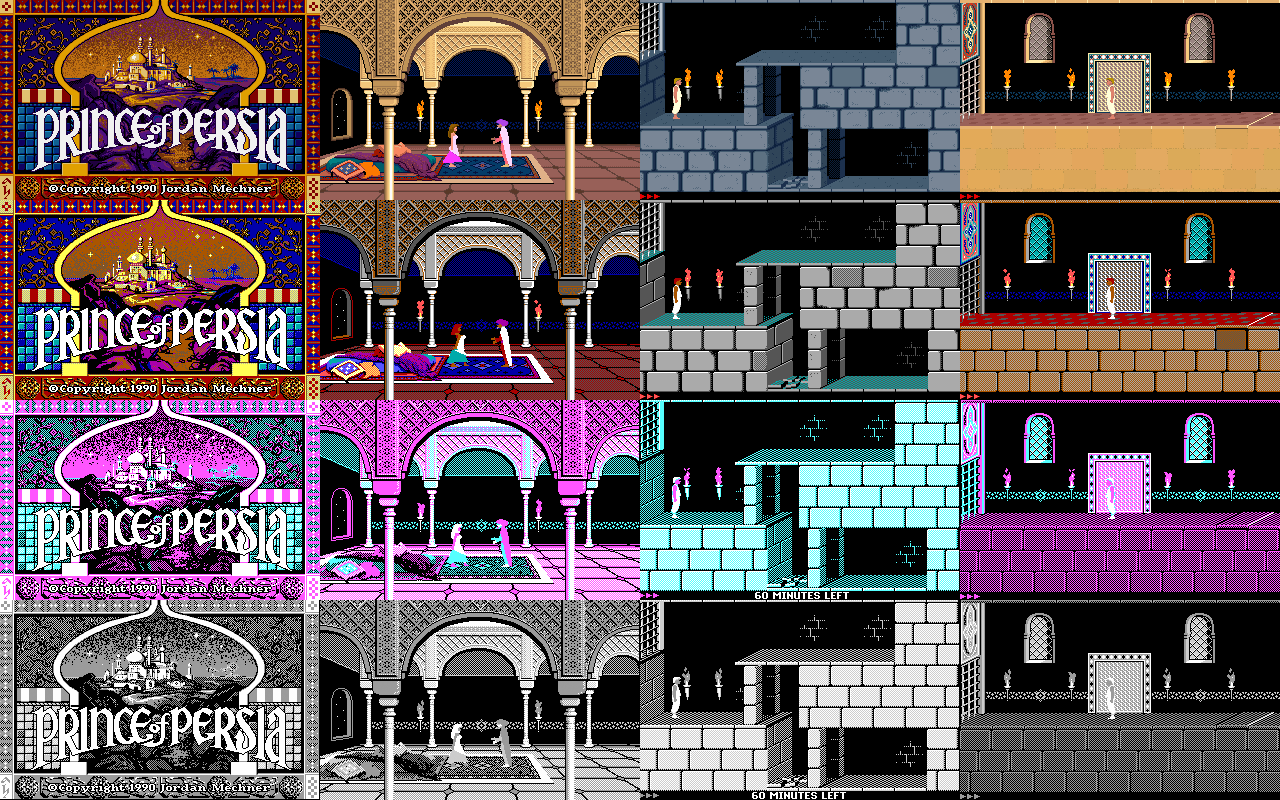 I only returned to PoP in 2020, and finally played the DOS version in VGA, with a sound card (first row above). It took me like 15-20 attempts to re-finish the game, what a nostalgic joy! This brings up that for me, although is easy to master Prince's controls (only 5 keys, 4 directions + action key) it is a difficult game, one small mistake and you're dead (and if you die too many times, without cheats you easily run out of time...).

Prince of Persia is a masterclass in animation, graphics, level design, sound, controls and storytelling (great story, levels and plot twists along the journey), and was mainly developed by Jordan Mechner alone on an Apple II. I am simultaneously finishing reading his PoP journals (which I also highly recommend), and now I'll play Prince 2. Along with Duke Nukem 3D, Prince of Persia is for sure the most important videogame of my life.

Recommended
It took me 30 years to complete this game. I saw and played it in school but never completed it. But now I did. This game will never go out of my mind. It is just great . Everybody should give a try to it. Shouldn't underestimate it due to emerging of new technologies. Senior people who are in need to learn computer but unable to grasp it should begin with this game to understand stroke and movements. Though not heavy in graphics but still very Descent and entertaining. Recommended highly to all.
«Blew my mind»
Kaustave BaruahJul 15, 2020
2 of 3 users found this helpful
+1
Recommended
Gameplay 9/10. Graphics 9/10. Soundtrack 3/10. Storyline 6/10. OVERALL 6.75/10. (A 7.5)
«Constantly dying and enjoy it»
AlexLiftingBROJan 10, 2020
Nobody found this helpful
-2