Love or hate From Software’s Souls series, it is undeniable that From has changed the face of gaming by showing designers and publishers that gamers want a challenge, even it means that they will die over and over again. Many games have tried to reproduce the formula in various ways each to their own results, but after our time with Death’s Gambit, a new side-scrolling RPG from publisher Adult Swim and Developer White Rabbit, we believe they’ve nailed the mark for better or for worst. 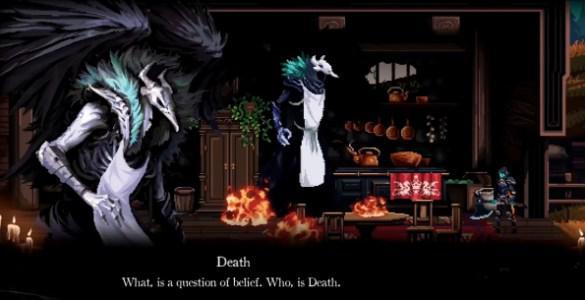 In Death’s Gambit, we’re introduced to Sorun, a soldier who recently died in battle. On his way to have his body burned in a funeral fire, Sorun meets Death who signs a contract making him immortal and sets him loose on taking on a group of soldiers who have also been turned immortal.
Like the Soul series storytelling, most of the game’s story is kept under wrap at first, allowing you to come up with your own theory about everything that is happening, while it works with the Soul series and other games like Dead Cells, Death’s Gambit doesn’t give you enough information to allow you to really get into it. However there is an exception, when you die after succeeding at key points, you’re given a glimpse at Soren’s tragic life which gives us an appreciation for the character. 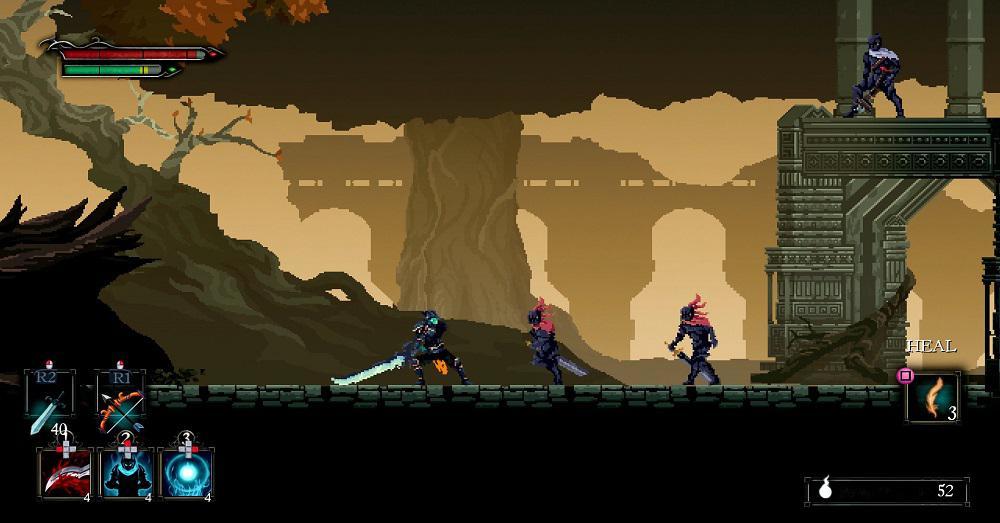 When it comes to gameplay, Death’s Gambit is purposely slow, with Soren carrying huge weapons that take time to swing and do damage. A stamina meter is also applied and is associated with multiple features of Soren’s movement including attacks, jumping and dodging.

There is a few problems you can expect from this though and it mainly comes in the form of timing and controls. Much of the enemies you end up going up against are generally fast and your weapons based on the ones we’ve found and gotten to try, are extremely slow. leading to some insanely frustrating deaths that feels like they could have been easily avoided. 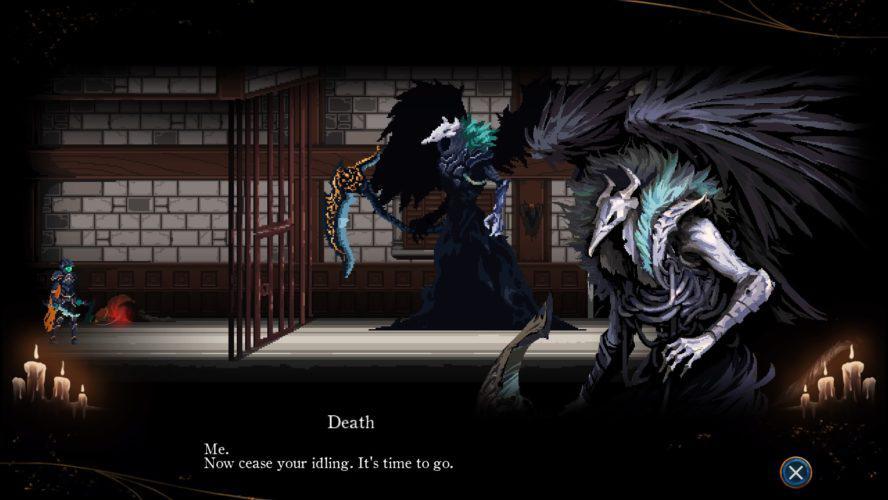 It’s because of this that I found myself putting the controller down and restarting the game from the beginning with different stats more times than I cared to admit until I found the right build and weapons that worked for me. If you’re into the meticulous planning with your stats, a lot of the negativity towards being an enemy’s pin cushion will go away.

Even if you’re not like me and force yourself to start over, you can still rack up the experience points fairly easily thanks to fact that you won’t lose your experience – or souls – after you die. This allows you to go and boost your shortcomings without having some crazed maze of death all over again. You do however, lose something equally important and that is your health items.

It also helps that Death’s Gambit is beautifully crafted with some of the best pixel-art we’ve seen yet, which really pulls the dark/gothic world together. It especially makes itself useful when it comes to monsters and extravagant characters like Death. The music helps set the mood and accompanies the art, raising tension in the boss battles and keeping up the sense of dread as you expect to be mowed down by the next well drawn creature. 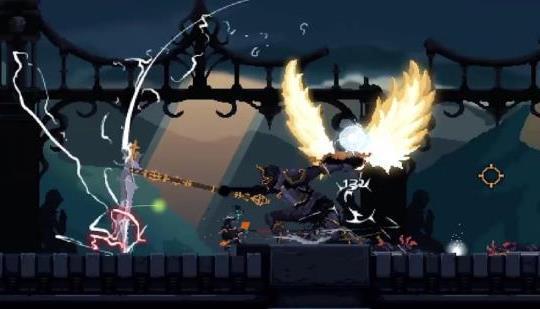 It’s sad to say that we can’t judge Death’s Gambit for it’s own merits as its mechanics have been borrowed from one of the most recognizably challenging games released within the last two generations only done as a 2D pixel art hack’n’slash. Still what it does, it does right, and if you can get over some of the bumps from the slowness and the ever frustrating multiple deaths, Death’s Gambit proves itself to be one of the better indie titles of the year.
Review from: https://gameitall.com/deaths-gambit-review/
«Constantly dying and enjoy it»
«OST on repeat»
GameItAllSep 19, 2018
1 user found this helpful
+1

Skip
Translated by
Microsoft from French
With its look of notes crossed with dark souls, death's gambit has everything to please:-stunning graphics (the game is really beautiful)-a soundtrack that listens pleasantly-a pretty "basic" gameplay to take in hand and above all... A bunch of bugs and optimizations not present. Between the monsters that are stuck outside the map, the skills that do not activate (and sometimes activate in duplicate...), the loss of the cursor in the inventory, the inability to sort his inventory... As a reminder, the game is not in beta/early access. We can also talk about the map which is in the end tiny... 2 paintings, boss, 2 paintings, boss... In short, play there, fight on a staircase and you will quickly understand your mistake by having taken this game.
Akrozia
Steam, Apr 19, 2019
Skip
Translated by
Microsoft from French
A big disappointment:-the game is not really beautiful, some beautiful effect but most of its dated, like the flames. -the hitboxes are MISERABLES on certain boss and certain enemies, and the fact that our perso answer pretty badly does not fix anything (I just finished dead cells, the comparison is painful); the platform sequences are frustrating and the moveset of the weapons are ridiculous on some weapon-the TCoS Dev is risky, arrived at the "hub", several path, not very clear, by which "boss" am I supposed to comencer; all are as resistant and "well seen" not to have put a respawn point on the side, it is a real pleasure to retype a whole area badly screwed before trying his boss-the classes are nice but the active skills are overall lame , some simply do not work; When passive skills, 80 percent of them have no useful effect (20 percent of the damage for 10 seconds when I pick up a potion... Wow it changes everything) a herzatz of dark souls but with a gross finnission
Joe the Doge
Steam, Apr 19, 2019
Skip
Translated by
Microsoft from French
In the current state of things I can not recommend death gambit. There is clearly potential but there are really many aspects to work on. First the classes: only the class of the magician has really merit and can take you away while the others are all alike. Then there is no map function so impossible to know where we are and where we can go. Navigating blindly for hours is frustrating. Then there are some kind of bugs you Dodge or jump and pouf freeze of the perso you can do nothing more. Hope for an enemy to kill you or you'll have to leave the game. Speaking of leaving and coming back know that your shortcuts are delivered by default and so you are obliged to reconfigure everything every time. nice. Will you die? You caught a book on the way and forgot to rest? Consider him lost. Forever. You will come back to the right place you will not find it. When we pay 3 trailers, which make you pass for a big as a title to the Witcher 3, and that it is only the esbroufe then you really feel the bite of the €20 in the heart. My opinion? Buy it on sale and at discount.
Talamarie
Steam, Apr 19, 2019
Meh
I'm a bit I'm biased I have been waiting to release for 2year or more since Its Kick Starter I have been following Twitch Stream and Twitter post. I have been Interested in the artwork and the technology used.
This game as Lore, good gameplay (not in perfect shape), awesome Graphics and design.
As you see I'm avoiding typing the flaws they are the minor thing they might distract you from the essential core of the game.  It inspired by  Dark Souls and its gameplay can remind you of Salt and Sanctuary (probably) and many other titles.  I want to declare I am giving my passioned not critical.    I think this game really deserves more.
«Time-tested»
«Constantly dying and enjoy it»
SnoAug 22, 2018
0