2064: Read Only Memories is a retro game set in a cyberpunk world.

The game takes place in the near future of 2046. At this point, the technological advancements allowed people to augment their bodies and enter virtual reality. Most importantly, the robotic assistants called ROMs became increasingly popular and largely replaced the regular phones. The main producer of the robots is a corporation called Parallax, and it plans to create a new kind of fully independent AI. There's a rebel party called Human Revolution that aims to stop the progress of the AI.

The main engineer of Parallax, Hayden Webber, recently was abducted. The main protagonist is a journalist who researches the Webber's disappearance. He or she is accompanied by Turing, a highly advanced robotic assistant. They go on a search in the fictional city of Neo-San Francisco on the eve of Christmas.

2064: Read Only Memories works as a point-and-click adventure game with a static first-person view. The environment and characters are presented to the player as slightly animated images. He or she can interact with them by clicking and choosing options, such as to look at, to take, or to speak to.

The game is made in the vein of the 1980s and 1990s graphic adventure games. It uses pixel art visual style with minimal animation and neon-lighted environments, accompanied by a synthwave music score.

Collections with 2064: Read Only Memories

2064: Read Only Memories created by

91 achievements
4.42%
Plasteel and Silica
Unlock all other trophies
6.34%
Bad Association
Lexi resents you
6.89%
Iron ROM
Play through the game in a single session and never use a load or continue.
6.89%
Not a Cat Person?
Jess resents you and refuses to help you in your final quest
7.16%
Son of a Gun
TOMCAT resents you
view all achievements
91 items

2064: Read Only Memories reviews and comments

Recommended
Ok game to paly!
SnoOct 11, 2020
0
Meh
Sometimes I wish I finished this game and then I remember why I didn't. I get that this is more a visual novel, but there were opportunities for gameplay that would've made it more engaging that were sadly missed. After a while I got bored.
«Boooring»
OakleyApr 5, 2020
0
Recommended
Translated by
Microsoft from Deutsch
Product received for free I LOVE this game! I am not particularly fond of solving puzzles, but the puzzles in this game were totally okay. They are very easy and quite logical, so they don't get you stuck and allow you to really focus on the dialogues and the story. I absolutely love pretty much all the characters! Especially TOMCAT! :) And it's really nice that you get to explore the city a little longer after you have finished the game. The story is quite interesting and makes you wonder about the future of AI. The style is pretty retro, but quite amazing and fitting. I also noticed and enjoyed quite a number of VA-11 Hall-A references. In my opinion, 2064 has everying I loved about Va11 Hall-A, but offers much more action and a more captivating story. I fully recommend buying this game. Please keep up the great work!
Ellinmara
Steam, Apr 18, 2019
Recommended
Translated by
Microsoft from Deutsch
I have mixed Feelings about this Game, and I don't know if I should give a definitive Yes or No here. I choose No because the Price doesn't reflect the Performance, but there's some good Stuff about the Game. The Story is very much in the Foreground here. I Wouldn't describe as outstanding, though. There's a bit of Surprise in here and there. In large Parts, however, the Story is simply too predictable. In the End, there's someone who wants to see the World burn .. That's old. We know That. Could have been thought of. That's how it turned out. And: There are more Endings than just one, in some cases they can come as a surprise if you have eaten your Way through the Dialogues. How does this come about? If you Were good with the Characters and in the few Puzzles, there are good Endings. It's nothing New. With the Release for PS4 and The Renaming in 2064: ROM added a Lot of Voice Acting, which makes Lyrics quite long. Yes, that gives life to the Lyrics, and pretty well, but out of ten of my Hours of play, I spent about six or seven "listening" to the Characters and picking a Dialogue Option here and there. There's not much Interaction, it feels like a graphic novel. The Puzzles in the Game should provide variety. I could cover someone with it who is nine Years old, but they are decidedly too easy for all Ages above it. Unfortunately, the Game does not have a high Replay Value in itself, except for the Achievements perhaps, but which are a Steam feature. Before buying such Games directly, I personally always advise off. I am All the more so, because for 20 Euros, far too little is offered. If you are a Fan of Point 'n 'Clicks, you may be able to access for 5 Euros. On the other Hand, you can't do anything wrong if it's mixed in a HumbleBundle. Which was quite the Case ...:)
Read more...
[email protected]
Steam, Apr 18, 2019
Meh
HEAVILY Policenauts inspired but, directed/written as it is by someone who isn't Kojima, obviously not quite comparing in the level of world-building and absurdly wacky plot. The world of Neo-SF is simultaneously more cartoony (with anthropomorthic animals and cutesy, colourful robots) and grounded in reality (with little being truly unfamiliar to real life outside of a few allegories), and feels much less dystopian than that of Policenauts. It also features lengthy conversations as its main gameplay component and, where most games of the genre use puzzles to break up the dialogue, any "puzzles" in ROM are light and so heavily railroaded they just provide more text to click through rather than requiring any thought. Where most games might say "It's locked" when examining a locked door and leave you to work out how to change that, in ROM Turing will stop you to tell you that NOT ONLY is it a locked door but WHY it's locked, the precise steps you need to go through to unlock it, and even its exact make and model number. Although it does make those interesting with slight mix-ups now and again, overall the game feels glacially slow and leans more towards a visual novel than its adventure games inspirations (although the wonky controller-based shooting sections are carried over perfectly, whether you want to call that a positive or negative). 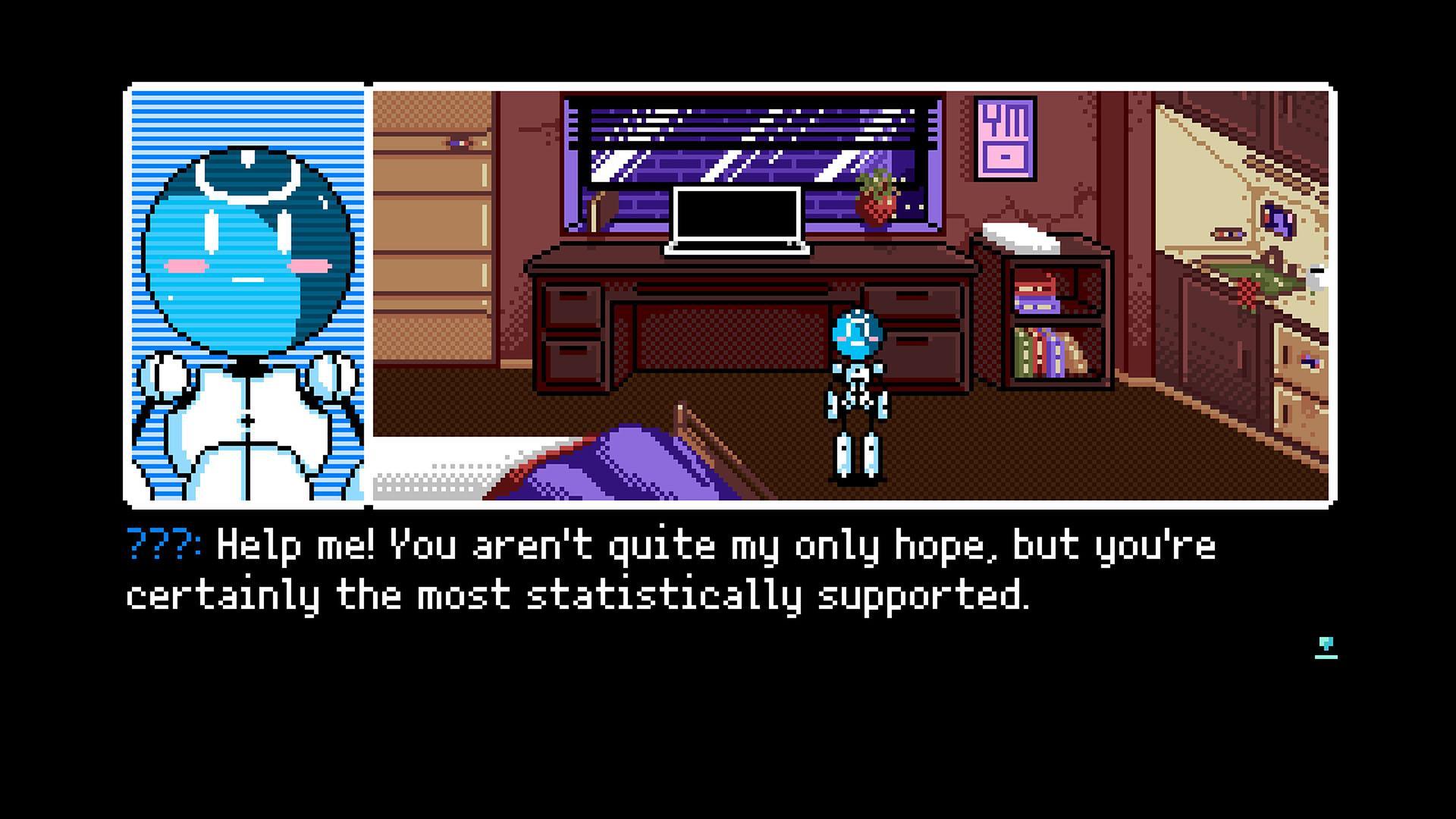 Surprisingly the game is 95% voice acted and quality is generally high for main characters, although bit characters seem like they're mostly cameos from non-voice actors and can be more of a mixed bag: A protester played by someone I do like is nonetheless jarring and pretty bad, but 2 Mello - the game's composer - puts in a great performance as a street rapper who needs your help to think up rhymes (one of the sections I mentioned earlier that varies up the conversations). As you might expect from 2 Mello's involvement, the soundtrack is excellent (and probably my standout feature of the whole game). I'm particularly partial to TOMCAT's theme as it sounds bouncy enough to be straight out of an Ace Attorney game.

All of the character's I've mentioned, bar one, are good fun and undoubtedly the main draw for ROM - talking to all the colourful characters is given just as much prominence as the main story - but, unfortunately, the one character I found occasionally frustrating is the one you spend the most time with - Turing. Your player-character is a voiceless blank slate, having no real character other than "journalist", and so Turing both serves as your window into the world through examining things, and does most of the talking to other characters. While mostly fine he's sometimes really grating with how confrontational, and at times downright stupid, he can be.

After just completing it, the story never went as big in scope as I was hoping/expecting but none-the-less had a very satisfying ending and epilogue chapter, going out on a high note.

2064 also has (at least in the Switch version) an absolutely brilliant Extras section. It's unlocked from the start and has grouped sections for concept art, music (beautiful UI in that one), backgrounds/wallpaper, UI/HUD, and character sheets. You can zoom in on all of them, most have at least a couple stages of progression from concept to final version, and are annotated with descriptions and why things were changed between versions which really helps give a sense of how the game came together.
Read more...
JustCozzieJan 27, 2019
0
read more
Related pages
Arcade Archives DOUBLE DRAGON II The Revenge, Paranautical Activity, FINAL FANTASY TACTICS: THE WAR OF THE LIONS, G Prime Into The Rain, Type Knight