Recommended
It's ok. Very combat heavy, although the premise would allow for more imaginative solutions than shooting everything until problem is solved. The combat is fun, with the skills available and the environment getting demolished. There's just too much of it. There are a some puzzles, but they are few and far between. Great level design and memorable scenes at times.
remitoidMar 23, 2021
0
Recommended
Concise Review:

Great: Unique dynamic combat system that feels smooth. The atmosphere and visual style to the game including the amount of particle effects and physics is very well done.

Good: Story and background lore. The RPG mechanics are solid, simple, but do allow for some tough choices in what to upgrade, multiple builds exist that play pretty differently.

Bad: It is so easy to get lost. Checkpoints could be better organized or spaced out.

Awful: The map is pretty much useless, actually it’s worse than useless because it’s so misleading.

Strong opening. Cool vibes. I’m already digging the mystery and the atmosphere of the game. I like breaking stuff. The particle effects are cool. Combat is visually pleasing because of it. It’s very satisfying.

I’m getting lost a lot. I find the map confusing. I need to stop looking at the map and look at the actual world more. I’m liking the combat though. This game has had a promising start. I just need to figure out how to navigate the world better.

I’ve had multiple cutscenes where there is no audio so I have no idea what happened. That’s frustrating. Other than that the only other bugs I’ve dealt with are that the map doesn’t always load in, but I hate the map regardless.

Combat continues to improve. It’s the highlight of the game. The atmosphere of the game is still great but the story is a lot simpler than I expected it to be. It isn’t bad, but i thought there would be more. It felt like a story driven game at the start but I don’t think I’d call it story driven anymore. It’s gameplay and mechanics driven. If you want the full story you need to read a lot of the collectables. I’ve read a handful and some are interesting and well done, but reading papers found throughout a game has never been my thing.

I liked the story bit when she meets the brother. That was a good scene. The fungus areas and black quarry were great locations too. The locations and style and atmosphere to the game is still really good. I just hope we get a bit more details in the story. I hope it goes somewhere.

The fungus people seems suspiciously similar to TLOU. But hey, I like them so I’ll look the other way.

The game is still getting better for me. Im appreciating the different builds that you can do with this game. There are lots of different ways to allocate upgrades. I could see this game justifying a second play through.

The lore reading material is well done and I’m reading more of them than I typically would. I usually find the bonus reading material in games just messes up the game’s rhythm and takes away from my experience but in this one I am coming across tid bits that are interesting relatively often. It’s still not my preference for story telling though.

It’s slowly climbing the A- ranks, but still near the bottom.

The hotel bits aren’t that good. They are repetitive and unrewarding (so far).

The distorted credits scene I enjoyed. It came out of nowhere. There better be more to the campaign though.

I googled and I’m not that pleased with the ending. It’s too vague and lacks details, not super satisfying. That being said, overall I was still interested in the story the whole campaign. I just don’t think it lives up to its potential.

I do plan to beat a few more of the side quests. I want to play around in this world a bit more, which is always a good sign, but this game is going to finish as a low A-. It has the building blocks for an amazing game due to its gameplay and atmosphere but unfortunately it is also negatively affected by some quality of life issues, and the actual storyline doesn’t live up to the standard that the atmosphere and lore creates. I’m left wanting more.

Final Score: A-
Read more...
xXWoodinatorXxJan 3, 2021
0
Meh
I really like so much about it. It’s creative and mysterious, and the gameplay is wild. Unfortunately, it’s nearly impossible to navigate and gives you so little to go off of that I spent the majority of my playtime frustrated, searching for every simple objective. That’s hard enough when the map is available, but 50% of the time it won’t even load. I would have thought the bugs would have been worked out by now. Very sad and disappointed I won’t be finishing this awesome story.
andrewleinesDec 4, 2020
0
Exceptional
What a fantastic game
«Blew my mind»
«Can’t stop playing»
MauroTKSep 5, 2020
0
Skip
_
«Oh God i managed it»
Дмитрий СиваковSep 5, 2020
Nobody found this helpful
-1
Recommended
Nice
«Time-tested»
Muntadher SalihMay 27, 2020
1 of 2 users found this helpful
0
Meh
Too much of a shooter. There are only five psychic powers that are acquired pretty spread out through the game. Launch is great, helped by how much of the environment is interactive, Evade could have been a regular dodge but it's fine, Shield is ok after you upgrade it a bit, Seize (controlling weak enemies) is also ok after you upgrade it a bit, and Levitate. And that's it. The rest of the game is a shooter supplemented by Launch. Zoom in to aim that every game after RE4 has done, crouch behind cover every once in a while, and shoot boring guys with guns (some have shields, some have grenades that you can Launch (after you upgrade), some fly and you can't really see them at first) with either your pistol, shotgun, SMG, grenade launcher, or Pierce that fills that "slow but powerful" archetype, somewhat of a sniper if you upgrade it right.

RPG mechanics feel more like bloat than interesting: there are upgrades ("mods") that feel more minor than anything, too much crafting material that you have to grind for, skill points that are mostly stat boosts, and side quests that are mostly backtracking.

The shooty bits are mostly bland. What I said above about weapon types; most combat encounters lock you in an arena and have you kill a bunch of the same mooks over and over; bosses are either "shoot the weak spot" or bullet sponges with no in between; the screen is messy and only gets worse (the red filter of "hurt" makes you unable to see the red of the enemies) the more hurt you get, made worse by playing such a physically weak character; and the map is open somewhat like a Metroidvania without the abilities or recontextualized backtracking that makes those games great, instead focused on just getting a new key in a cutscene that opens new doors that you have to backtrack through messy repetitive hallways and respawning boring gun enemies to open, all to get one of those boring upgrades I mentioned above.

Really wasted potential in my mind. Being in a government facility is a cool, unique setting (though I won't really get into how on-the-nose "Federal Bureau of Control" or how played out the "government is keeping secrets from us" conspiracy story is), but you end up wandering aimlessly around bland, messy, repetitive hallways with little-to-no signposting. The psychic powers are cool, but they can't decide if the game is a psychic physics game or third-person shooter so it's a bland version of both. I don't like the plain gun-wielding enemies but they would have been a lot more interesting if you didn't play as a person with a gun! The aesthetic is really cool and they put a ton of thought into it, but they use that to tell a boring X-Files third-person shooter rip-off that we've all seen a thousand times before.

Also that framerate really kills me. And weirdly only slows down when I unpause.
Read more...
«Disappointment of the year»
«Boooring»
markbass69Apr 23, 2020
1 user found this helpful
+1
Meh
I found this frustrating A.F. I spent most of my time lost and running round aimlessly. the lighting goes from pitch black to too bright, so you end up blind most of the time. the story is not told in a good way and the acting is really bland and don't even mention the frame rate, don't bother unless you have a ps4pro. i'm not going to waste any more of my life on this turd of a game.
RSbisketMar 15, 2020
1 user found this helpful
+1
Exceptional
2019 compared to 2018 was a weak year in the case of big AAA titles. So Game Awards awarded Sekiro (i didnt play that game but I'm sure it is spectacular too), and IGN awarded this game, Control, as GOTY.

From outside, I just thought it was mainly about the new so called ray trace tech and some fancy graphics with supbar story... Boy, was I wrong. Game had great story telling mechanics, alongside with a great story. All fantasy fiction theories are somehow fitted in wonderfully in a believable way that makes you believe they are real! The scientist Darling clips, all the letters and multimedia found, I consumed them with a great interest. I was like, "more, give me more Darling! More scientific letters about cool unnatural devices, such as human eating refrigator!".

And game was accompanied with great graphics. I dont have a ray tracing gpu so i didnt get to play with the prievelege of ray tracing but still, I found the non ray traced graphics still gorgeous. Besides graphics, the game's engine was spectacular, the physics and all. Everything almost everything can be interacted with which makes the game even more fun.

All an all, I understood why IGN chose this as a GOTY. I would say this game surely deserved a big GOTY award!

I greatly look forward for the second game, if there will be one.
Read more...
«Blew my mind»
«Constantly dying and enjoy it»
yamaciFeb 28, 2020
0
Recommended
I joined this website just so I could rate Control. Quantum Break was ok, just ok, and it got a novel and TV episodes meanwhile this lovechild between X-Files and Men In Black (while Eyes Wide Shut was watching from behind a curtain (that didn't exist and yet was in the room)) didn't? Ugh, not cool, Remedy. And yet very cool. You learn and explore with Faden as she does know more than you but only by so much and the things/events you witness/engage that are meant to be hidden from the outside/real world are so strange and compelling that the aesthetic and narrative delivery devices more than make up for samey shooting. I'm starting to think Control is better than Max Payne in terms of what I respect Remedy for making more and I can't fucking wait for the DLC. If only just to watch/be Faden navigate through the Oldest House some more. Also, like QB, 80% of the writing is found in the bevy of optional collectibles which are honestly worth reading if you've 1000'd the game and need more. In a year where we got REmake 2, Ace Combat 7, Toejam and Earl and other great titles, I feel like I was proudest of experiencing this weird, weird thing.
«Blew my mind»
«Underrated»
ChallahBreadFeb 20, 2020
2 users found this helpful
+2
Exceptional
just played again with the both new dlc in feb2021 & i must say its really brilliantly made and had lots of fun playing it... this game has aged very well after all these year... 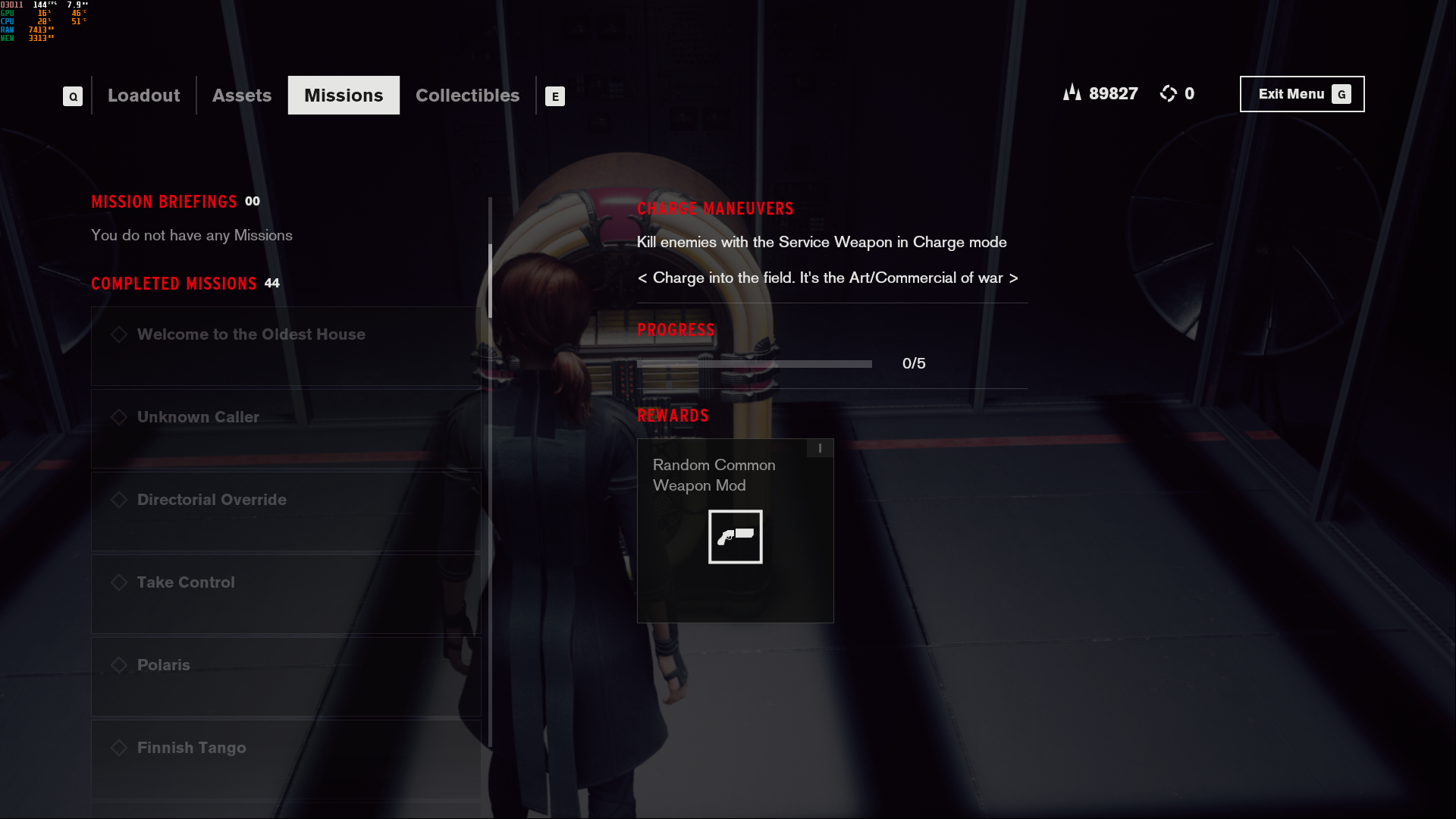