Living in a city where the sky is gray 90% of the time, the words "Risk of Rain" feel like an emotion and have a sense of home, calmness and serenity.

After seeing the title I had to take a closer look; needed to know what lies beyond.
So, what did I find? A very hard, action platformer with few rogue-like elements. You jump, run, shoot and the longer you play the harder it gets.
"But every game gets harder the longer you play!" That might be true, but this game has a timer which increases the difficulty every ~3-9 minutes(depending on the difficulty).
--> There are 13 character(1 starter + 12 unlockable ones)
--> 3 difficulty levels (somewhat managable, hard, ultra hard)
--> 10 artifacts which act as gameplay modifiers
--> 1-4 player local and online coop

So what is the game about? Your spaceship gets attacked and you strand on a nearby planet... that's it. Your first character is the 'Commando', who is the ships ¿captain?, but as you unlock more characters you can also unlock "pieces of story" as each character had a role on board of the spaceship. There's a cook, a repair robot, a prisoner and 9 more individuals. Everyone has their own goals, reasons and endings.

After a gruelling journey fraught with slaughter, the impact on the player's character is accentuated by nothing but a single line: "...and so he left, with everything but his humanity."
Minimalistic to the point of not existing; only visible to those who want to see. Is there even a story? I'd say, no! Not in the traditional sense at least. There is information, characters and their motivations. And even though the games makes clear that it is not about the story, I still enjoyed the small pieces I was given.

This simplicity is somewhat shared with the style of this game.
Pixel art which won me over with beautifully drawn backgrounds and the dance of a million particles filling the screen. While there are not many different monster types, the existing ones differ greatly in style and attacks. Additionally the game tries to compensate the few types by having multiple variants of each, where some are invisible and others are on fire.

The downside of that simplicity is that you can loose track of the player character easily on higher screen resolutions, or if you zoom out too much, or later in the game when every enemy encounter becomes a fireworks spectacle.

The Soundtrack is made by Chris Christodoulou ~and his music was electric~.
Songs bound to the level which start slow and build over time, accompanying the ever increasing difficulty.
It's a small selection of tunes that range from unremarkable to simply amazing and some are contenders for "best soundtrack ever". Chris manages to put all the sorrow and pain into a haunting melody that also manages to portrait the action on the screen.

The soundeffects are rather basic; focusing the players attention and still lending the scene a hint of danger, but never more than that. The sound effects, no matter how loud, lack impact and diversity.

Fazit: 5/5
The gameplay is fun, the music is haunting, the story is basic, the style is simple and the _ game _ is _ awesome.
The menu is worth mentioning for how bad it is. There is not enough settings, navigation is a nightmare and some elements are not clearly visible. The menu is a UI- and controlability disaster.

// Negative
- Volume can only be turned from loud to extreme
- Menu navigation could use a lot of work
- Developers moved on - patches unlikely (there are bugs)
- Needs patience and skill, which only few people are ready to practice nowadays 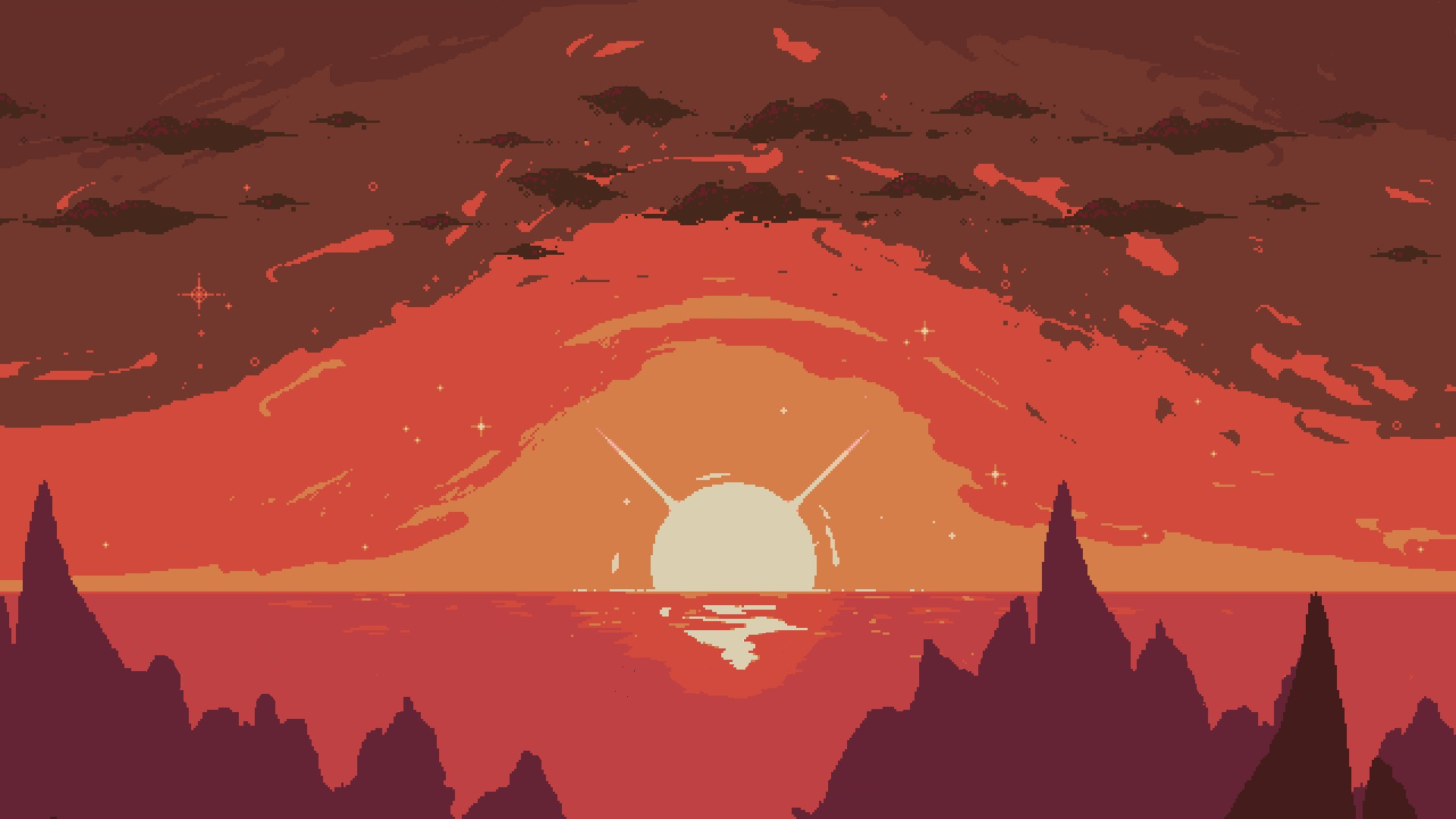 Fun little rogue lite. Played 4 runs on normal and the realized I might as well start with easy and I beat the game on my first easy run. It was still a bit challenging at the end and I really think I had a good build. I had 5 jumps which was very helpful. I plan to at least beat it on normal. Maybe hard if I really like it. It will depend on how long it takes to dee repetitive. I hope the new characters add some unique strategies.

This game is actually quite fun. I’m liking it. I beat the game on normal using the commando. The key parts of my build are multi jumps and heals for kills or damage. I also think that it’s more important to get a bunch of items than to rush to finish the levels. Sure the enemy difficulty gets harder as time goes in but by the end it’s maxed out anyways and if you have a ton of items by that point you can cruise through it. I unlocked a few more characters so I think I plan to try to beat the game with at least 3 more characters but we will see how long till it feels repetitive.

I’ve now won with the engineer and the huntress as well. Both on normal. I don’t plan to play it on hard. I think I may try the loader who I havnt played as yet. And maybe I’ll give the sniper another go but otherwise I think I’m about done. It was fun. It’s getting a bit repetitive now. Even though the classes are different I’ve found out the best way to play is just make sure you open nearly every chest. Sure I’m not getting fast times but I’m always winning and after the first couple areas I’m usually pretty overpowered. Fun game for 2$.

Beat it again with the guy who drops electric pylons. That’s enough for me. I had fun with it.

Final Score: B
Read more...
xXWoodinatorXxApr 18, 2022
0
Meh
Not for me
TheEmperorsEyebrowsFeb 17, 2021
0
Exceptional
9/10
«Can’t stop playing»
«Liked before it became a hit»
Rafael Gazola GhediniSep 11, 2020
0
Recommended
Translated by
Microsoft from Deutsch
Great Game, especially in the Co-op with Friends it's a lot of Fun:) Was skeptical at the beginning because of the Graphics but the Game is great and it's really worth buying it:)
Katienchen
Steam, Apr 19, 2019
Recommended
Translated by
Microsoft from Deutsch
Risk of Rain is a great 2d game the dynamic gameplay and the difficulty are the main strengths of the game. Also it's not even that expensive and has a multiplayer so i can just recommend the game to anybody who likes difficult games
♪KnieFF♪
Steam, Apr 18, 2019
Recommended
Translated by
Microsoft from Deutsch
Very good Co-op game for in between! Despite the inferior Graphics, this Game is highly recommended for 2 or more Players. You can't play enough Rounds before you want to stop. The Game is divided into different Levels, which you have to gradually free of Monsters and find a Portal through which you get to the next Level. The Level Of difficulty increases continuously over time during the Game, a Feature that fascinates me personally very much.
eisn22
Steam, Apr 18, 2019
Recommended
Translated by
Microsoft from Deutsch
Risk of Rain is, in my Opinion, an ingenious Game from the Creators of "Starbound." It has this great retro look and a really stunning Soundtrack that just gives the whole Game an ingenious Feel. The Game motivates through its many Unlocks and the High Scores, which of course you want to surpass again and again. Especially with Friends, the Game is really Fun and it demands one, so you want to Focus on it. The Setting, the Pixel Look, the ingenious Soundtrack, the motivating and demanding Game principle (Difficulty increases the Longer you play), as well as the Multiplayer simply speak for the Game. The 8.99 Euros are worth it! Super Game, especially with others together!
Urobolos..
Steam, Apr 18, 2019
Recommended
Translated by
Microsoft from Deutsch
Product received for free A very successful Game with great Challenge. At First you feel like a total Beginner And still have Problems, but if you take some Time you realize that it's not impossible. Risk of Rain is quite extensive and offers many different Items that can be used during the Run. Pro:-the Game runs (for me with an average PC) quite fluidly and You can't complain about serious game errors-beautiful Graphics and Animation-if you're really in a mood, you can easily gamble for several Hours in a Session, you just lose Not the Desire to continue playing-especially with Friends, Risk of Rain is even more Fun-the Game offers numerous Challenges and therefore does not get bored so quickly Contra:-apart from the constantly growing Degree of difficulty, there is little Variety and You keep playing your way through the Levels-if you're almost done with the game (= has all the unlockable Items), it may well be that you stop playing after all and only look at it on Occasion (or if your Friends are begging) n give this Indie a Chance as it consists of pure Joy of playing and you can always play when you're in the Mood.
MistaSmiff
Steam, Apr 18, 2019