It's hard to say why people removes one A from the AAA when describe this game. It feels like a typical Playstation exclusive, trying to look like a movie. From the very beginning, we are told that this is a serious story, aimed for many awards and make you write long reviews after you finish it (Oops). Usualy when focus goes to story, gameplay always suffers. So, what I get this time? Female God of War, Death Stranding with swords or Grim Lollipop Chainsaw?

True, here is "no fun allowed" club, but you must be know about that and be in right mood before you start playing. The topic is important. Main focus of the game are mental disorders that built twisted reality of main character — Senua. This is not just buzz words, and the consultants writen in the credits really helped to convey realistic hallucinations and posible source of this problem.
At second layer same old story of fathers and children, but being told within fictional dark ages feels fresh and adds a lots of nuances.
While playing, we are constantly told by the myths and legends of the Vikings, which in some ways resemble the fate of Senua herself. There are many, but most likely you already know them. But as a little distraction, during constant walking just fine.
Well, what kind of movie can be without lovestory? The strongest motivation that drives the hero forward through monstrous trials is salvation of the soul of the beloved, whose head hangs on her waist. And it realy works! I belived that this is very important goal and worth all this suffering. 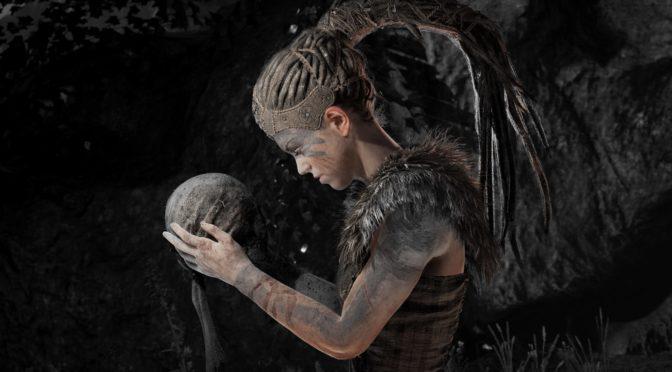 I played in headphones, as recommended and it's really impressive: the sound here deffinetly works on a new quality level, which no one has yet approached! The whispers of inner voices comes from different sides and actors' play make you believe in Senua's teared personality. Voices speak contradictory phrases, forcing player to doubt his actions and wait for a threat that didn't exist. I've been caught once, when they make me to believe that the torch can go out — bravo! Also, voices are clever used as pointers, suggesting where to go and what to do.
Visual style is also beautiful, but we've already seen this. All these cold rocks, moss, wild plants and shackled together wood logs have appeared many times in many games. Even Viking castles not surprise anyone. But still visuals are impressive: I stopped many times, just to look at the sunlight reflected in the puddles. Btw, Ninja theory continue to use live action footage. This time actors placed right in scene and camera matches with their position so they didn't looks flat (like in Myst). Very clever. 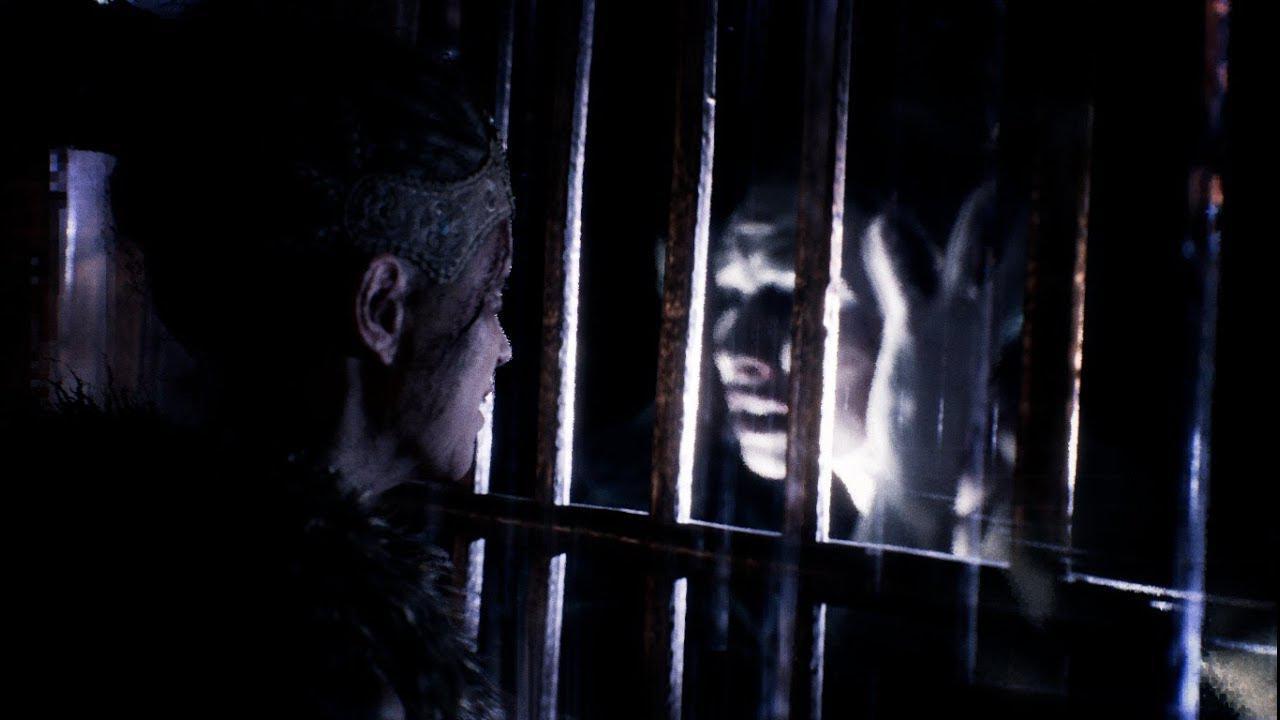 As new thing, developers have made original puzzles, playing with enviroment. Finding symbols in the environment is fresh idea (if you didn't play The Witness before), and perfectly illustrates real mental problems when a person searches for unnecessary patterns around before doing something. Unfortunately, to get this working and to be sure that player didn't stuck somewhere, puzzles have to make very simplistic. The necessary objects always in sight, and when you stand next to the right place screen start to flow with lights. It is difficult to imagine how to do it different, so I assume that developers did alright.

I heard many complained about combat system, but I was quite satisfied with the fighting. It allows you to maneuver between enemies, constuct effective series of attacks and at the same time become hard when you get damage by adding long pauses between attacks. The set of movement will even increase slightly during the game. However, you still get bored from constant repetition of the same enemies.
It's less a game and more of a story than you might think, but without interactivity, it would never be so immersive. I was scared, angered, amazed and confused for real so this is definitly worth playing.
«Can’t stop playing»
«Sit back and relax»
iBarinJul 6, 2018
4 users found this helpful
+4
Serge Ulankin
Thank you for the review. I was going to play it anyways, but now I know I can discuss it with you afterwards! 🙂
Reply

Exceptional
10/10
rochallorFeb 10, 2022
0
Exceptional
Incredible experience!
«Blew my mind»
tossetazDec 19, 2021
0
Exceptional
Play with headphones for the full experience.
Graham KaletskyNov 20, 2021
0
Recommended
combat is decent, puzzles are repetitive but level design changes it up enough to stay fresh for the couple hours it takes to finish this game. I honestly don't have much to say about the psychosis part because I have no experience with psychosis whatsoever. My only real gripe here is the absolute abysmal walking speed
TheEmperorsEyebrowsOct 7, 2021
0
Meh
The story, atmosphere and visuals are amazing! The game takes place in some very interesting places. But the actual gameplay... While the puzzles and combat feel OK in the beginning, towards the end I just felt annoyed when I saw a door with runes on it or Senua drew her sword. And the length of the combat phases as well as their frequency just went up in the last chapters.
remitoidJul 23, 2021
1 user found this helpful
+1
Exceptional
Definitly a must play if you like story based games.
«Blew my mind»
«Sit back and relax»
ryanchoiJul 6, 2021
0
Meh
As far as post-millennial awareness games go, this could've been far worse, especially considering it comes from Ninja Theory. Slow and whispery with ham and cheese acting accompanied by a stale hack and slash system doesn't make up for how pretty it looks but that's ok because it's about psychosis. I'm thankful I don't suffer from similar issues myself but I can't imagine this makes people more appreciative of how able they are when they have to deal with pretentious narrative trumping the "message." It checks off a bunch of boxes you have to expect from AAA-Indie at this point - if you love tearing up when female protags find their strength like the lyrics to Fight Song, you'll probably also enjoy this. The very definition of meh. Imagine Dear Esther but you can mash X.
«Disappointment of the year»
«Waste of time»
ChallahBreadApr 30, 2021
1 of 2 users found this helpful
0
Exceptional
One of the best games I've played. The story, the music and the art are flawless, the combat is a bit underwhelming but it is not the main focus of the game so it barely matters. I cannot recommend it enough.
«Blew my mind»
«OST on repeat»
itwashereSep 19, 2020
1 user found this helpful
+1
Recommended
An incredibly original game that really tries something new with it's story and character(s). Gameplay however isn't the greatest and neither was it the games main focus. What it lacks in fluid combat it makes up for in story. The detail that both you and your enemies get weary during a fight is amazing and i'd love to see that more in other titles. Can't wait for part 2.
s_henselmansJul 14, 2020
1 user found this helpful
+1
Exceptional
What a Tour de force!
«Blew my mind»
«That ending!»
BorisJun 14, 2020
0
Exceptional
7/10 - fighting with half of the Norse mythology while experiencing psychosis.
«Blew my mind»
«Underrated»
StormcloakApr 12, 2020
0
Skip
Not worth the money.
«Disappointment of the year»
«Waste of time»
Leo LuApr 5, 2020
1 of 2 users found this helpful
0