Pyre is an action-adventure game developed by Supergiant games.

The game is set in some purgatory. After getting banished by the society, the main character finds himself all alone. Three exiles soon approach him and invite the protagonist to party with them and nickname him the Reader. The group sets out to cleanse their souls.

The gameplay of Pyre revolves around some sports game, which is connected with a ritual known as the Rites, which happens in a parallel world. The Protagonist controls his three newly found friends in battles against three opponents on a small arena. Each team has its own pyre. Both pyres oppose each other. The objective of the game is to defend your pyre while attacking the enemy one. The player can only destroy the pyre with the orb, that is spawned in the center of the arena and which has to be grabbed and thrown into the pyre.

During a round, the Reader can switch between the character he wants to control and pass the orb from one to another. Each player has their own amount of endurance which is required for moving around the arena. If the players of a team come together, they create a zone that is dangerous for the player that carries the orb. If the player with the orb should get into that zone, they'll be temporarily removed from the game.

While free from the Rites, the player can travel through the world of Pyre, train his teammates or try to learn more about the Rites.

40 achievements
1.92%
True Nightwing
Complete your quest for freedom (Campaign, True Nightwing difficulty)
2.44%
Herald of the Scribes
Earn all other available trophies in Pyre.
6.15%
Master Conductor
Prevail against a Master CPU opponent with six or more Titan Stars active (Versus Mode with default Masteries, Talismans, Pyre Health)
6.34%
Lick of Flame
Prevail in a Rite against a CPU opponent while you have less than 10 Pyre Health (Versus Mode with default Masteries, Talismans, Pyre Health)
6.72%
Fear Not the Flame
During a Rite, douse the adversary's Pyre by 40 health or more (Campaign)
view all achievements
40 items

Recommended
jodariel i need to tell you something. IM FUCKIN BALLING!!!!!!!!!!!!!!!!!!!!!!!!!!!!!!!!!!!!!!!
«Underrated»
vivrcardMar 22, 2022
0
Meh
Man, I don't even know. I only played this because I'm a huge fan of their other two games and looking forward to Hades. But this was really a miss. Everything about it felt like Supergiant sniffing their own farts. Much longer more jukebox-y sound track, overly explanatory lore dumps, complicated gameplay systems that don't really do much for the plot, drawn-out opening and end sequences, huge amount of unnecessary "hard mode" additions, way too much backtracking over and empty world. I can't really imagine playing this as anything other than a Supergiant superfan and even then, why bother when their other games stand on their own so much more? At least this really solidified Supergiant as one of the best studios doing the "apocalypse as metaphor for cycles of pain" that IMO outshines From Software by a mile, but they've proven they can do it better in Bastion, Transistor, and next hopefully Hades.
markbass69Sep 22, 2020
1 of 2 users found this helpful
0
Skip
Translated by
Microsoft from Deutsch
Very atmospheric Play, little Movement and a lot to read but an emotional Story if you can get into it. In addition, a Replay Value, because you can make several Decisions. The Game Mechanics are interesting, but a seemingly simple Ballgame System mixed with some cool features, which makes it quite challenging and exciting. The AI is relatively good and surprises one time or another (Whereas every now and then you could just wait your Opponents to just run into your Shelling). The Music is very apt and classic, which fits well with the Story and the Theme. With a Game time of about 30 Hours for a Game on Normal, I am completely satisfied with the Game (however, I bought it in The Steam Sale for 10 Euros). It seemed simple but fun and went surprisingly longer than expected. The End is fitting and satisfying and in the End you feel like playing it through again because the Dialogues change according to your Decisions.
Feyriel
Steam, Apr 18, 2019
Skip
Translated by
Microsoft from Deutsch
The Game makes it really not easy to evaluate it. Just for the fact that you can manage to be an RPG/Sportvisuel novel Game in one, you would like to recommend the Game to others. Add to that well-functioning Gameplay, a very beautiful Story with well-staged Characters, great Music and a terrific Artwork. Now one may wonder why you can't just recommend Pyre unconditionally ... Well, unfortunately, the Game completely Falters after about 6 Hours. You keep fighting repetitively against the same Opponents, the Story is already told and only turns in Circles and the Characters don't develop anymore and tell you the Same thing over and over again. Had an End to this had simply been put to an end, Pyre would have been a terrific Game. Unfortunately, it seems as if the Developers have tried convulsively to implement everything they have come up with. Nevertheless, the Game leaves a lasting Impression on me and whoever has the necessary Seat meat towards the End will have fun.
./ak[a]ry.u¯\_(ツ)_/¯
Steam, Apr 18, 2019
Skip
Translated by
Microsoft from Deutsch
Pyre an Adventure through a colorful dangerous Environment on the Way to fulfill the various Goals and Dreams of its Friends. The Game happens very much on the Story conveyed by many Text Boxes and Book Entries. For my Part, I thought it was beautiful how even the Opponents and Supporting Characters are given a Story that changes with every Decision you make. The Rites are also an important creative Means to bring in some Variety. Quickly and tactically, Opponents must be turned off and a Ball must be carried into the Opponent's Flames. A Team of 3 Characters with special Abilities must be controlled. These Skills can be enhanced by Level Ascents and Trinkets. In doing so, one should also accept losing, as it forms part of the Story and you are not really punished. Denm Difficulty is appropriate and can be changed with the Titanium stars in front of the individual Rites. And you don't have to talk about the Music. She's just fantastic and nothing else was expected of the Master Darren Basket
bleed-blue
Steam, Apr 18, 2019
Exceptional
While not Supergiants' best and the small growth of gameplay being the weakest part, no words can make up to the beauty and depth of the art, music, story and characters. 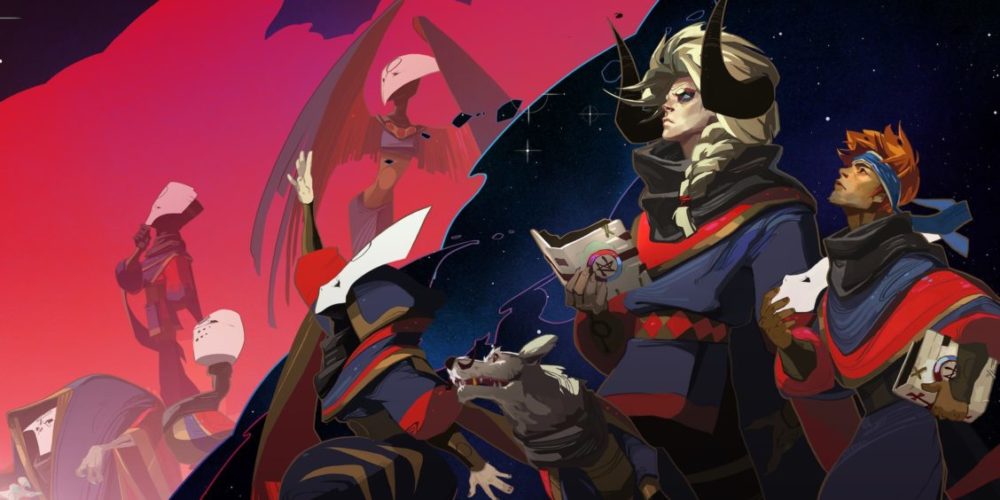