After 20 hours I am so tired of Assassin's Creed: Shadow of Arkham that I am uninstalling it. I have no intention to return to the game and regret the time I spent with it.

Gameplay
Gameplay-wise, Shadow of Mordor is an exhibition of achievements of game development of the past few years. Roughly speaking, it's 49% Assassin's Creed, 49% Batman Arkham series and 2% of its own.

The Assassin's Creed part is effortless parkour, climbing towers and “synchronizing” for fast-travel and stealth with a few ways to distract and eliminate foes. Although I must admit that stealth here is more inventive than in AC, it's not just whistle, wait, one-button kill, rinse and repeat. At least later in the game you'll be given more tools to assassinate: such as poisoning the beverage and controlling uruks.

If you fail at stealth, here comes the Batman Arkham part. The combat is a shameless copy-paste and works like this: counter every time you see a prompt, attack every time no one is attacking you, perform a special attack every 5 blows, rinse and repeat.

Nevertheless, I must give credit that the combat is actually fun and made me stay with the game for so long. It feels good to chain combos, the killing animations are satisfying and varied and there are quite a few special moves that you are going to like to perform. But when it's the only thing that makes you stay, it starts feeling repetitive after a while too. I can ruin this for you before you play, just watch the 404 hits combo below and you'll know just about everything the combat has to offer.
Story
The 2% come in the Nemesis system, the gimmick that journalists went on and on about and that actually made me play the game. It generates random uruks for each playthrough, bestows unique strengths on them and cripples them with unique weaknesses. These uruks have been fighting for power and will always be, and you act as a disrupting force which shakes up their hierarchy as you please. The problem was that I didn't want to.

I read dozens of nemesis stories on the web before playing Middle-earth: Shadow of Mordor, and all claimed what a unique experience it was to gain a mortal enemy that kept coming back from the dead to face you once again or to bind with an uruk and stay in this love-hate relationship for hours. Perhaps I was too good at the game, was I? I never had an uruk to live long enough for me to get to know him. They all were just expendables, and I cut through the cannon fodder of Mordor with ease. To be honest, I died more from the deadly fauna of Mordor than uruks. At the same time, bumping up the difficulty seemed strange as I understood that more hit-points would not be likely to breathe in more personality into random-generated uruks. 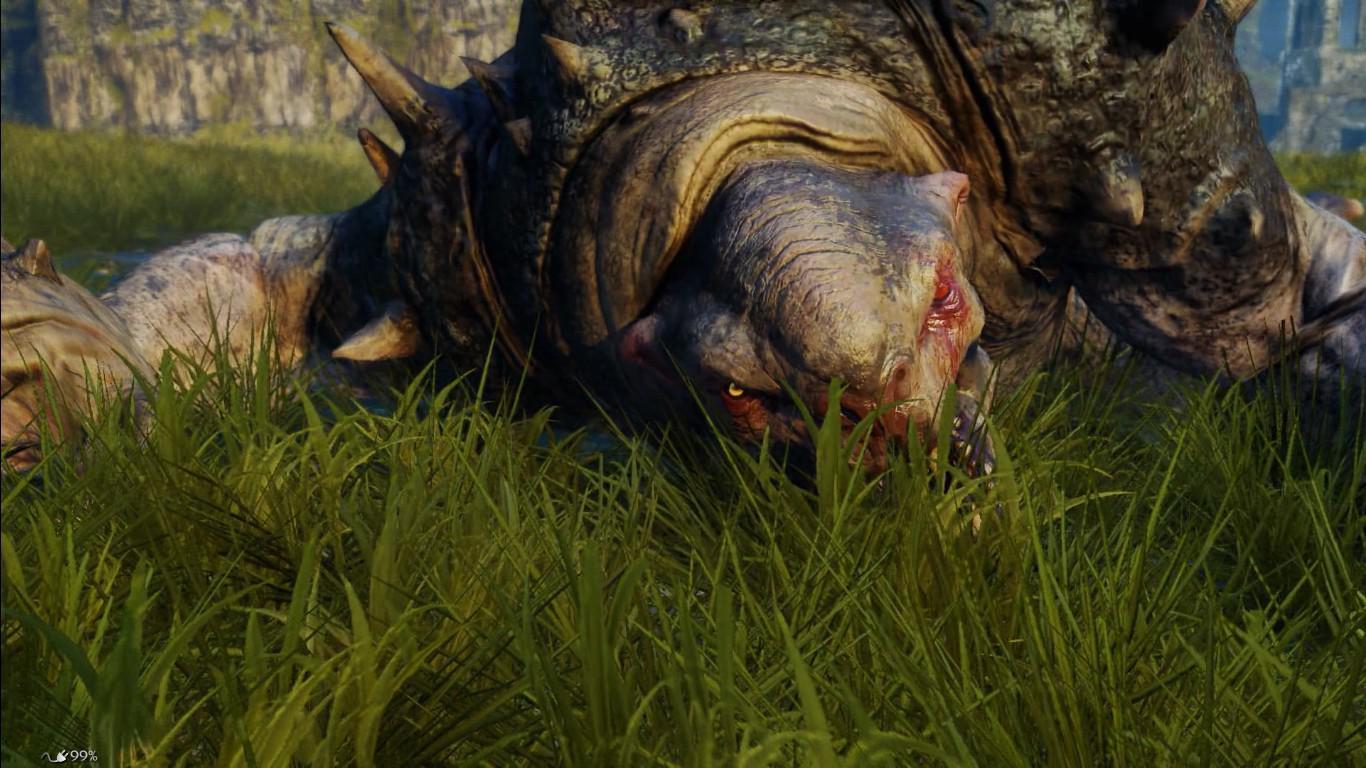 What's left from Shadow of Mordor if you remove the “make your own story” gimmick? Not much, I must say. The characters were uninspired, the storyline was hard to follow and slow to progress, and the twists were simply not there. The story is pieces of Tolkien fan service scattered around the dull bloody cursed land. The first major character you meet is, of course, Gollum with the exact voice, moves, and looks of that from the film. I completed more than half of the storyline and Shadow of Mordor was a parody of Tolkien which distorted every stylistic or narrative trope of the source material. It's not necessarily a bad thing and I, in fact, have never been a fan of the Lord of the Rings universe, but it was a weird mix of fan service and negation of Tolkien at the same time. 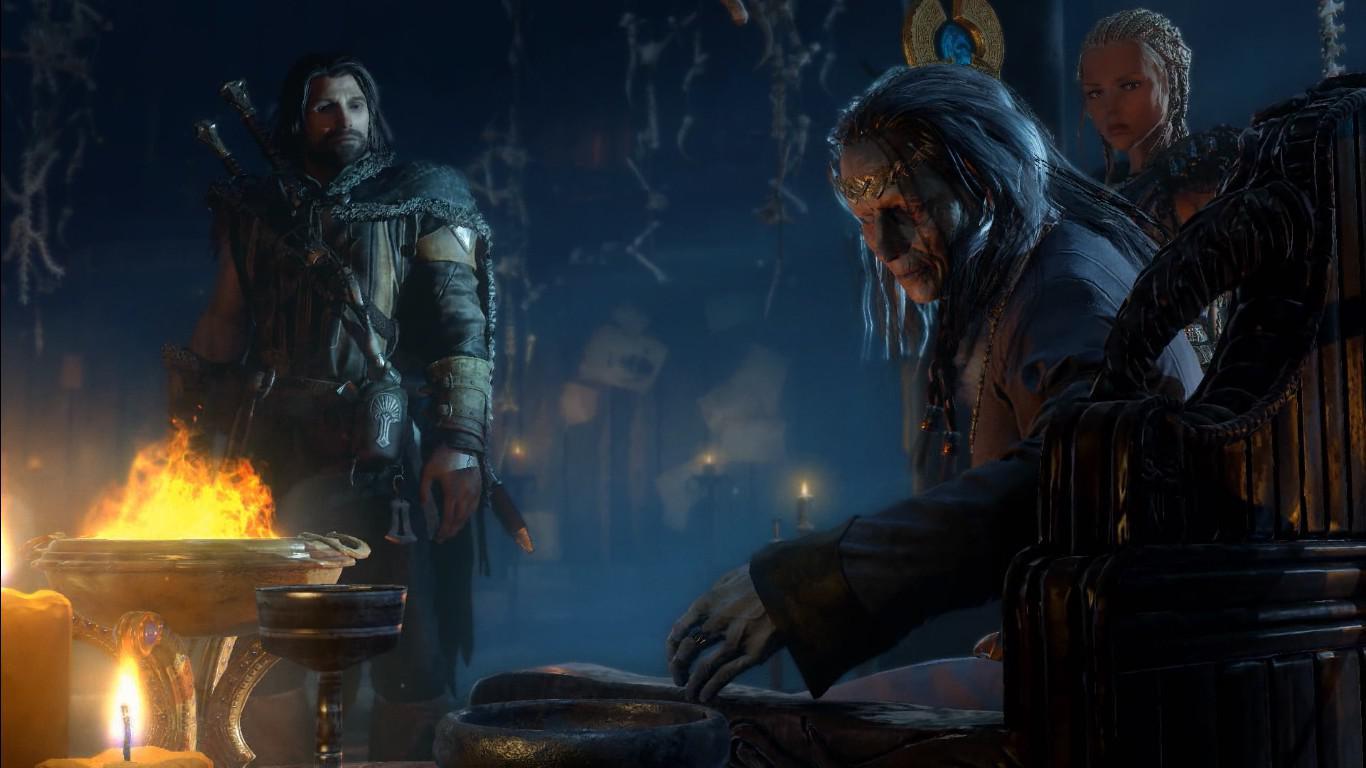 Atmosphere
Middle-earth: Shadow of Mordor is a very stressful game. It has no ups, the music is always tormented strings and dark ambient effects. It makes you paranoid, you scout for safe places when you start playing but soon you realize that the only places where you can rest are forge towers (fast-travel points) and the pause screen.

Does it make you FEEL like you are in Mordor? Yes, and this is a good thing. Does it make a game enjoyable? No. 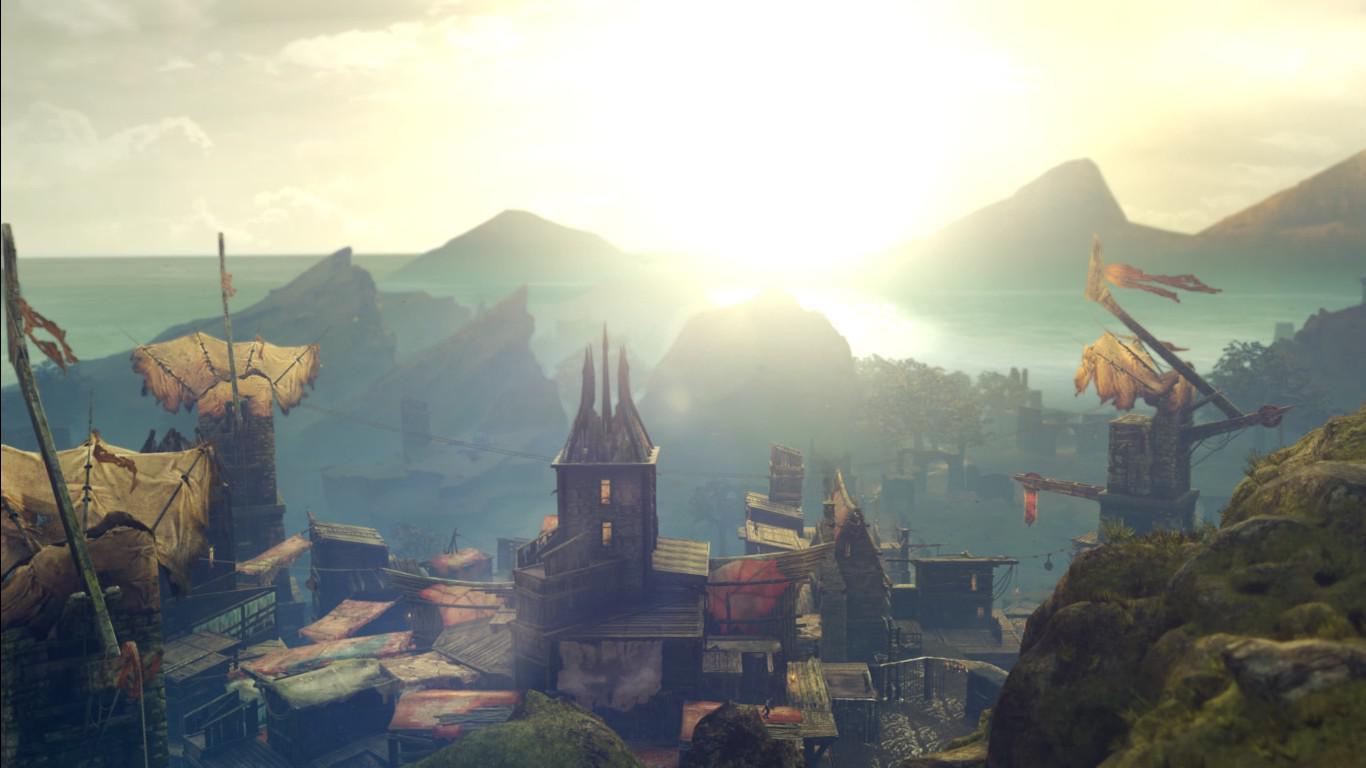 This was, perhaps, the main reason I am dropping the game with no intention to play it. I don't mind repetitive and plagiarized gameplay, after all, there are only so many things you can do in action-adventure games targeted at a wide audience. I can tolerate the dull story and even no story at all in an action-adventure game. But I can't play something that is so hostile, unwelcoming and unrewarding. You can't conquer this world, you can only make a dent in the army of Sauron, which will soon be replenished by new random-generated uruks.
«Waste of time»
Serge UlankinDec 14, 2018
3 users found this helpful
+3
krai
I think I'll skip this one and will play Shadow of War. Thanks for the great review!
Reply
2 comments

Exceptional
ONE OF MY FEV GAMES..
Subham SarkarJun 7, 2020
0
Recommended
Solid experience. Very fun building up armies of mind controlled orcs. Combat was fun although I remember this game being a bit too easy. I didn’t care about the story. The second builds upon this game and improves it in many ways but this one was still a solid experience.

Final Score: A-
xXWoodinatorXxMar 13, 2020
0
Recommended
Translated by
Microsoft from Deutsch
So after I got my Bug problems fixed (Check Datein) I am Writing my Review again. I don't think I have to say too much about this slightly older Title, but I still want to do my impressions. The Game is a great Title whose Story Plays between the Books of "The Hobbit" and "Lord of the Rings." The Story is kept quite simple, so I'm not going to say Anything about it to avoid Spoilers. The Game World Mordor is very lovingly designed, and with the HD Textures DLC, The Game can still be seen today, Mordor is not very large, and Consists of only two Areas that you can quickly walk/Sneak through. I haven't even used the fast journey in all The time. Since I preferred it has to fight my way through. The Combat System is kept quite simple, and it is relatively difficult to die As long as you can counter, and deal with Shield opponents. Likewise, it will then be a little too easy, because you no longer have to fight the Opponents big, but simply to kill them en masse instead of them. And then let them kill, and when they have done their Service, you just Destroy them. So even the most braving greyly becomes an absolute Laughing Stock. Furthermore, I like the whole Uruk Chiefs And the opportunities you are offered to deal with them and the lower Ranks. However, they get a little too easy in the first Part of the Game because you ascend very quickly here as in other Games and have a walk from the Midgame. Example Games: Kingdoms of Amalur or Lords of the Fallen. Now I have finished Hunting Kampanie, and for this Short but very well done Story you get a little more from the Dwarf Torvin and get to know his View of the Things. And here I have to say that this Kampanie has made me sweat a little more because the Focus here is on the Creatures. Especially the Last Chief and Fighting Champion really demanded me this Boss had more fire than any other Boss so far. And from this Kampanie I am really hard hyped, now I just lack the Kampanie with Celebrimbor and then I would be so far through. And the big Schreenshot Editor, discovered Late by me, is absolutely Awesome, you already know it from Mad Max, but here it's a bit more Extensive. And so you can Perfect the Screenshots that are Perfect for you. Nevertheless, I have a Shortcoming, and it is about the Memory System. Either you Store at the Towers, or through Story-based Quests. The Game probably doesn't save any other way. So Whoever Collects everything, and does the small Side Tasks, and finishes the Game without taking advantage of any of the above opportunities, is allowed to do it all again next Start ... big Minus point for that. Verdict: First Of all, sry for so much Review. But you should have just played this Game, it strengthened and weakened. But if you can Hide these times for this slightly older Title, then you definitely have your bright joy at the Uruk Gemezel. You don't need to know the Books to understand the Story either, the Story tells everything quite well at its Core, even if There are gaps. So Reading books is not a Duty, but is recommended. And if you can't do anything with Middle-earth, you won't find fun here. Clear Buy recommendation, you could actually miss a very good Game here.
Read more...
[StwA] Asbestbrezel
Steam, Apr 19, 2019
Meh
Playing this game in 2018, when it seems every game is open world, is not that exciting. It has all the necessary ingredients for this kind of game, collectibles, various mini-missions, towers to uncover new map parts, but we saw this already in countless other games. What differentiates this game from the crowd is its nemesis system. But the catch is that I didn't like it that much, it's an interesting idea, but not executed too well. The most infuriating thing that it forces to use this system in order to progress the story, one time you have to kill 5 different war chiefs and other time you have to brand them. This is when you can see various design fails of the nemesis system and I almost deleted the game due to these parts.
KaimynasNov 22, 2018
3 users found this helpful
+3
Show 2 replies
Skip
This game is a bunch of bad decisions. The Arkham Asylum type fighting system makes the gameplay look like a dynamic QTA thing without any choice. It’s ridiculous that the enemies always (like, ALWAYS) attack you one by one while the rest of them are watching your fight. The game is too easy and even if you lose a fight (you must literally drop the controller to lose here), you won’t die - you just get up and run, and, well, you’re safe. Even the graphics are not that good now when we have so much better things on the market, so don’t waste your time here.
KeravanjokiApr 24, 2018
1 of 2 users found this helpful
0
Exceptional
Can’t stop playing this, even think about calling in sick. Shadow of Mordor definitely deserves the money. I haven’t got such fun for a while, you can’t imagine how good the story and combat are, so go try it better. Even if you get beaten up by a regular Uruk, you’ll be able to revenge soon and that’s an awesome feeling!
«Just one more turn»
MeZevApr 24, 2018
1 user found this helpful
+1